Just imagine how fun it would be when someone returns back to their show without even announcing that they are coming. Surprisingly fun right? The same thing happened in the ‘Saturday Night Live’ when Tina Fey and Rachel Dratch made an appearance in the show and stole the whole show in Super Bowl sketch.

The show is all about the argument between Boston and Philadelphia over who is better at fighting the British back in the time of American Revolution. The fighters of New England had a relative advantage according to them, because of the great Captian Thomas. You can watch the full sketch in the video in the middle of this article. Keep Scrolling.

More about the sketch

As mentioned above, the sketch highlighted the rivalry between Philadelphia Eagles and New England Patriots. Moreover, colonials were celebrating a victory at Bunker Hill. The victory over the Patriots over the British.

Must Read: Ellie Kemper is pregnant and Tina Fey is thankful for it.

Must Read: Composer/Director Jeff Richmond is more than just the man married to wife, Tina Fey!!!

In the video, Dratch declared,

We are the Patriots of New England and we are unstoppable!

Also, read: SNL's Bobby Moynihan talks about the troubles of dating and having a girlfriend 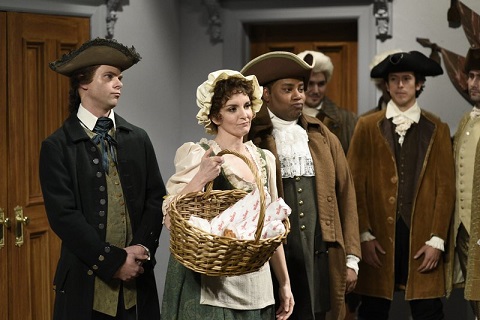 The group of Patriots celebrated being ‘number one’. There, Dratch acted being from Lexington, Massachusetts. On the other hand, Natalie Portman does a really bad Boston accent. The video is all about boasting of the wars The New Englanders won.

Also, read: Saturday Night Live star Kyle Mooney denies gay rumors, talks about what he looks for in a girlfriend

Then again, Fey enters into the conversation representing his hometown. She says with a Philadelphia accent,

Like eagles, we Philadelphians are swift, we are deadly, and our eyes are a little too close together.

Then Kenan Thompson follows by saying,

Must Read: This man looked just like Natalie Portman and people are freaking out over it.

The sketch was basically the talk between co-stars Fey and Dratch. The video ends with a decision to settle the whole thing ‘outside.’ The colonials declare that both parties are the worst and they hoped by some way or the other both of the group would lose.