Home Gossip John Cena And Nikki Bella Will Guarantee Get Back Together, Tweet & Source Says

John Cena And Nikki Bella Will Guarantee Get Back Together, Tweet & Source Says 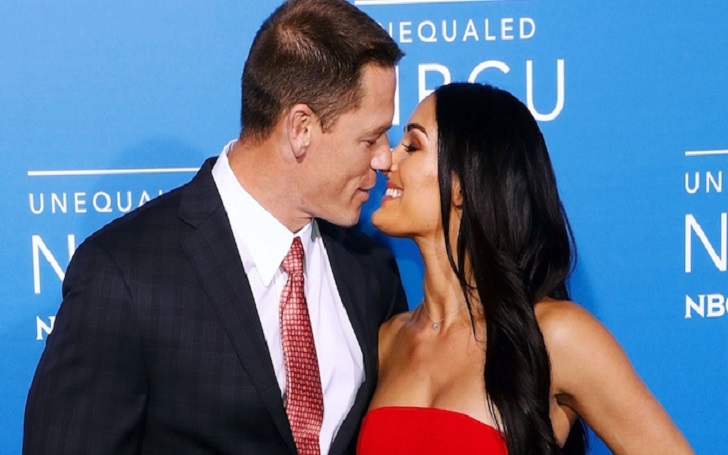 John Cena and Nikki will definitely get back together after seeing their tweets and IG story. Moreover, a source has also guaranteed that we will be seeing the estranged couple together.

Everyone is aware of John Cena and Nikki Bella separation after they called off their wedding set on May 15, 2018, but a reconciliation seems imminent here.

“John has constantly been in touch with Nikki,” despite the split a source confirmed People. The source added they will almost guarantee to be together again but the actual date is still unknown.

“They’re definitely on a path to reconciliation,” the inside source said. “John is the love of her life, and she’s definitely the love of his life, and that doesn’t just vanish overnight. In the end, they still want to be together.”

The pair was supposed to walk down the aisle on Saturday revealed earlier to the People that their break-up was due to the difference in thought about marriage and kids planning.

After the separation, the couple has been sharing the cryptic message. But the tweet they are making has started to make sense now. They seem to be working on to get back together.

“Learn from your mistakes. A life of regret is unfulfilled,” Cena wrote a couple of hours ago before tweeting “Action has consequence.”

Learn from your mistakes. A life of regret is a life unfulfilled.

Action has consequence. An extra second of thought can help you see the action, and consequence. “A game of chess is like a sword fight, you must think first, before you move.”

Also Read: Brie Bella Opens Up about Her Twin Sister Nikki Breakup Who says John Is Like Brother

Nikki Bella features her new t-shirt on IG reading “Bee careless when it comes to what people think about you.”

Amen to that! @mybirdiebee NEW arrivals are not only perfect for the summer but the way we should think! ???? Click link in bio to check out all the new items or swipe up in my IG story. Love you all! Your support means more to me than you all will ever know. #bellaarmy #mybirdiebee #birdiebee

Also Read: Who Was More Shocked With Nikki Bella First Marriage Than John Cena, Know Reaction When Found Out

Does that word People include Cena? If it’s for other than she is giving hints don’t care about people, let’s get together.