Home Gossip Who Was More Shocked With Nikki Bella First Marriage Than John Cena, Know Reaction When Found Out

Who Was More Shocked With Nikki Bella First Marriage Than John Cena, Know Reaction When Found Out 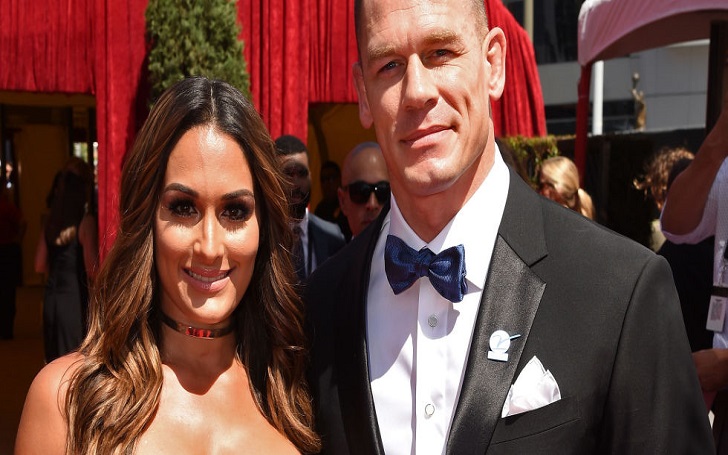 Nikki Bella was hiding all these days about her first marriage from John Cena and her family. When she revealed the nuptial truth it shocked the family member more than Cena who knew the secret before the marriage.

John Cena & Nikki Bella had a lot of ups and down going in their relationship and one happened when she revealed about her first marriage with her Highschool sweetheart.

The secret went to be the biggest plot in the Total Divas season 2, aired in 2014.

At that point, it has been already two years of Cena and Bella dating. She was in living relationship and she had signed 75-page cohabitation agreement that could force her out of her all belonging ASAP upon their split.

As the Total Divas part has released where she becomes more open about her Highschool husband. It turns out it was not only The WWE Wrestler Cena who she was hiding her past nuptial but was her own family too.

In the show, the camera taped the whole emotional sit-down scenario, where she talks about her first wedding with her family explaining mum Katheryn Colace including twin sister Brie and brother JJ Garcia that she was really ashamed of her first wedding decision.

Her family was not happy with the fact especially mom Colace, who wonder why didn’t come to her.

“I got married at the age of 20 and divorce at 23 to my high school love,” Bella said. “Basically we met most of the rituals and got married by Elvis. We drove to Vegas, did it?”

She continued “ I realized from the start that I was doing a mistake and I also felt it while I started walking down the aisle, it was a huge mistake but I can’t stop it from happening, she recalled in the show. Though she tried to erase it from her life forever it has again appeared in her life.

She was relieved as she believes John doesn’t the fact which was her greatest misunderstanding.

“It’s crazy because John doesn’t even know and here we talk about marriage and we never bring it up.”

But it was Brother Garcia who was more pissed than Cena.

‘John’s gonna be pissed. I’d be pissed for his if you hadn’t told him. Cause you talk about marriage all the time with him, don’t expect it to be easy,” Garcia continued you cannot always run from your past life and hid the marriage for almost 10 years.

It was Garcia himself who accidentally spill the bean about her sister marriage on Brie’s Wedding with husband Daniel Bryan.

First Cena was flabbergasted but later he managed to understand as he was previously married to ex-wife Elizabeth Huberdeau for 3 years and got divorced in 2012.

Later when Bella pull some courage to reveal the secrets, Cena said ‘ I don’t care what you did before you met me but now we are together being honest with me.” So Bella kept her secret with herself until now before revealing in the show.

Here it was Bella who always remained in dark not Cena.

Now Bela believes they will be still together if she had confessed the same day but feels bad now and cited it might be the reason that we are not together.

Cena proposed Nikki during Wrestlemania 33 and they called their relation off on Sunday via Social media.  The couple was about to get married on May 5, 2018.

Also Read: Nikki Bella gave a sensual Samba performance in Dancing with The stars, know all about John and Nikki's buzz

Looking at Cena post after separation he has suffered a lot and is acting like pity husband in the social media.  The split hurt him more than the secret of Bella first marriage.