On 22 February 2018, President Trump angrily twitted CNN news is fake and that is the reason why their ratings are so bad. 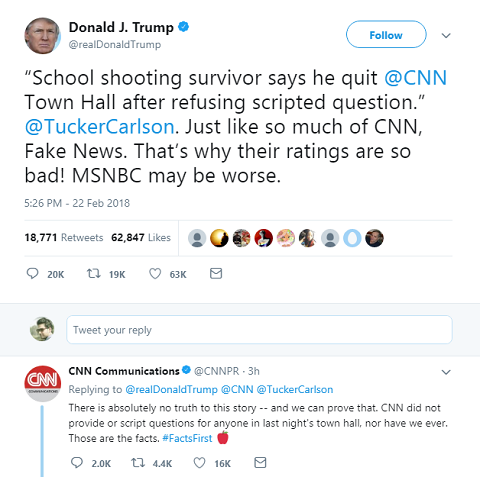 President Trump was reacting to Host Tucker Carlson on the segment of student Colton Haab who refused a scripted question about the gun violence recently occurred at Doulas High School.

CNN Communication replied “There is absolutely no truth to this story and we can prove that. CNN did not provide or script questions for anyone in last night’s town hall, nor have we ever. Those are the facts.#FactsFirst.”

After observing CNN interview with the student Haab, Fox News Host invited him in his part of the interview and it was shocking. Haab claimed that he was hand over a CNN rewrote & scripted question.

In the interview the student revealed that he was still carrying the question if Carlson wanted to see it. The student original question was about school safety and using veterans to secure school from gun violence.

Scripted town hall? Check out part of my interview with a student who claims CNN rewrote and scripted his question. CNN pushed back against the initial claim. Take a listen #Tucker @FoxNews pic.twitter.com/8uDuH6rBIv

Besides Colton, there are no claims from another student that they have received any type of scripted question.