Two-times Academy Award winner Renee Zellweger, undoubtedly, is one of the most talked-about Hollywood figures, whether it is for her proficient on-screen approach or her personal life. Married once which ended with an annulment, the Katy, Texas-native has been in many relationships including her engagement with then-boyfriend Doyle Bramhall II.

The Judy actress did go through a mental illness that resulted in her acting hiatus for 5 years until the 2010s but later got back on track. Already with 4 Golden Globe Awards, the Jerry Maguire (1996) star also didn't fear to try out her prominence on vocals and has released tracks for Chicago: Music from the Miramax Motion Picture and Judy.

As much as her love life & career success, rumors about the American actress and singer is evident too; and obviously, the claims if she had plastic surgery top the list. Let's get thoroughly about the Cold Mountain actress.

How Much Is Net Worth Of Renee Zellweger? Earnings & Salary?

According to Celebrity Net Worth, 53-year old Renee Zellweger has an estimated net worth of $90 million in 2021. From a cocktail waitress to an acclaimed Hollywood actress; an incredible transition of Renee who knows owns real estate worth millions of dollars.

All thanks to her on-screen dedication and versatility in a course of 3 decades, she is currently living a luxurious lifestyle. It can't be denied that Hollywood projects became a trump card to prominence for the University of Texas at Austin alumna.

Like many stars who went through struggles, she saw her way through commercials to low-budget and independent films. 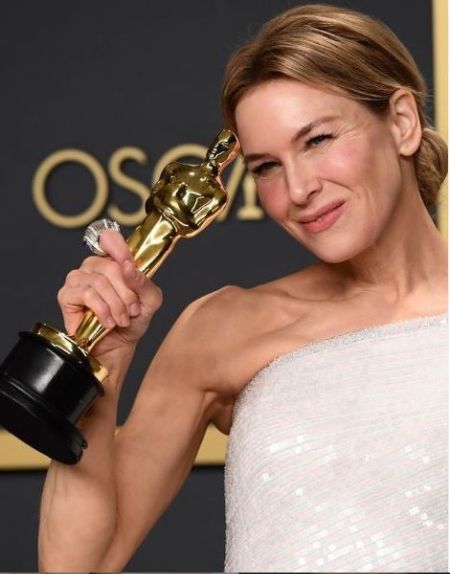 Although professional since 1992, the blue-eyed blonde got breakthrough in 1996 as Dorothy Boyd in Jerry Maguire opposite Tom Cruise. It earned her Critics' Choice Movie Award.

Then, following a few years, she portrayed Bridget Jones, the title character in romantic-comedy Bridget Jones's Diary (2001). Not only did the film see the American actress a paycheck of $3.75 million, but also a nomination for an Academy Award.

Then in 2002, Zellweger earned a salary of $10 million for portraying Roxie Hart in Chicago, while also earning Golden Globe and Screen Actors Guild Award. Until the mid-2000s, she summed up a hefty payroll from her film roles, no wonder, Renee became one of the world's highest-paid actresses by 2007. 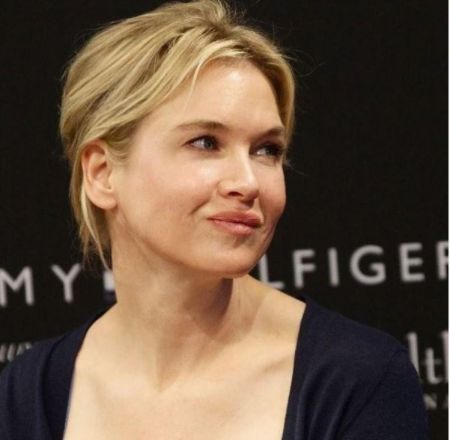 CAPTION: After breakthrough from Jerry Maguire (1996), Zellweger became one of the highest-paid actresses by 2007 SOURCE: [email protected]__zellweger

Here is the list of her salary from movie works:

Also Read: 80 Years 'Academy Award' Winning Welsh Actor Anthony Hopkins Married Thrice and Is In a Relationship With Wife Stella; Has a Daughter

Acting Hiatus and Comeback- Why Was She Off From The Screen?

After her career peak throughout the 2000s, Zellweger suddenly went hiatus on acting and didn't make any film appearances between 2010 and 2016. In an interview with New York Magazine, the American actress stated that mental pressure was the cause of her career hiatus.

Moreover, she added that much more her public persona increased, the inverse was her fraction in real life. So, she was seeing a therapist. 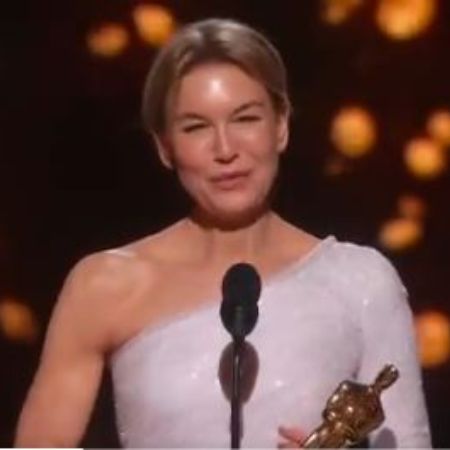 CAPTION: Zellweger wins an Oscar for her role as Judy Garland in Judy SOURCE: Twitter @TheAcademy

In 2016, Renee Zellweger made her comeback through Bridget Jones's Baby, the 3rd and final installment of the Bridget Jones franchise. And following works in The Whole Truth (2016) and Here and Now (2018), she appeared as the main cast Judy Garland in the biographical drama Judy (2019).

The film Judy won her an Academy Award for Best Actress.

Check out the box-office collection of her films:

The What/If actress was married to country singer Kenny Chesney; they married on May 9, 2005, on the resort island of St. John in the U.S. Virgin Islands. Reportedly, they had met in January 2005 at a tsunami relief benefit, 4 months before they exchanged vows.

However, the duo's hasty relationship was only short-lived as they annulled their marriage after 7 months, on December 20, 2005. 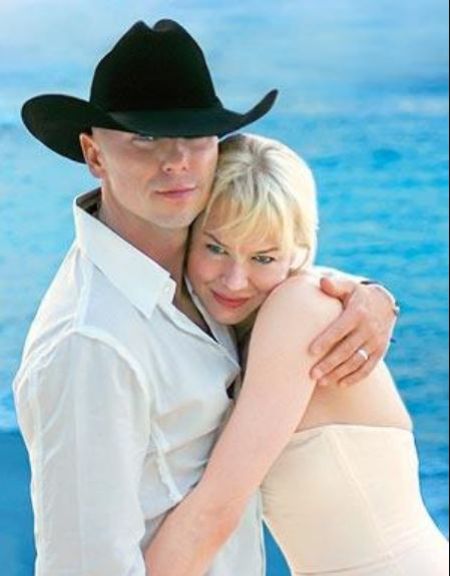 Then, it followed her rumored dating story with John Krasinski in 2007, and Dan Abrams in 2009, before her romance with Bradley Cooper bloomed in summer 2009. They had met back in 2006 on the set of Case 39 but began dating after 3 years. However, after 2 years of relationship, the pair called quits.

In 2012, the Judy actress began dating musician Doyle Bramhall II; they even were a hot-pick celebrity couple in the mid-2010s after their engagement in 2016. But their love faded after 7 years of togetherness as they split in 2019.

Also Read: How Much is Jack White's Net Worth? Know his Career and Awards

Who Is Renee Zellweger Dating Now?

Currently (as of 2021 fall), she is in a relationship with Wheeler Dealers host Ant Anstead. The duo tried to keep their dating story low-profile but media outlets, which are on par with spy, did not lag behind to break the news of their romance in June 2021.

By July this year, the couple made PDA on bike riding and later was spotted kissing while on a beach. They reportedly met on Anstead's reality series Celebrity IOU: Joyride, where he co-hosts with Cristy Lee, where Renee is one of the six stars on feature in the Disney+  new automotive haul series. 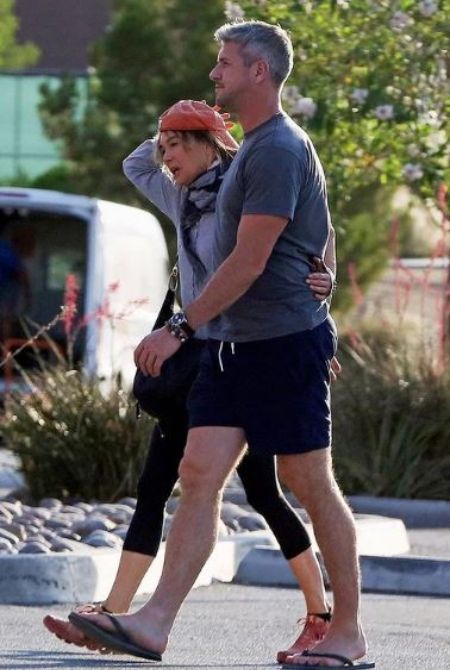 CAPTION: Renee Zellweger and her boyfriend Ant Anstead on an outing; they began dating in 2021 summer SOURCE: [email protected]__zellweger

In August 2021, while talking with USA TODAY, Ant joked that for him, Dinsey+ was much more than a professional platform, specifically a dating service for him.

The romance of Zellweger and Anstead came shortly after the latter's divorce with his second wife Christina Anstead finalized on June 21, 2021. They shared a child. Moreover, Ant is also the father to 2 kids from his first marriage with Louise Herbert (2005-17).

Did you know? Renee Zellweger is not active on Instagram.

The millionaire actress owns several houses across the United States; in Los Angeles, the Hamptons, Connecticut, and Texas. One of her major property holdings in her Connecticut home, with a 3,463 square foot main house on a 38-acre land, which she bought in 2004 for $1.32 million.

Although Renee tried to sell off the property for $1.6 million in 2014, she later decided not to sell and still owns it.

In December 2009, the American actress bought a 4-bedroom house in the Pacific Palisades community in California, that cost her a whopping $4 million.

Former house ownerships of Zellweger include:

Plastic Surgery Rumors- What Does Renee Zellweger Has To Say?

Over these years in Hollywood's journey, fans are not only amazed at her acting but also her dedication to transformation to justify the character. For the 2001 film Bridget Jones's Diary, she gained 20 pounds, while her portrayal as an iconic actress and singer Judy Garland, about her struggle with drugs, in the 2019 film, saw a drastic skinny appearance.

But, in the midst of such acclaims, Renee is not free from rumors, stating she had a beauty-enhancing surgery.

Although she never admitted this, fans seemed certain that the actress had an upper blepharoplasty. Moreover, the rumors were more intense after she seemingly looked different in a red carpet appearance in 2014.

The Academy Award and Golden Globe Award winner didn't nod her head upon the claims of cosmetic surgery. Rather, she opened up about the scrutiny and emotional trauma of the rumors, during an interview with U.S. radio station SiriusXM in September 2019.