Last night Start sports brought you all actions of Wrestlemania 34 in your TV screen that took place in New Orleans. It was WWE’s biggest show ever that involved every bit of puzzling, debut and multi legend moves in the ring.

The 16-time world champion Cena was badly destroyed by the deadman who finally answered the challenge appeared in the ring. In less than 3 minutes undertaker defeated Cena with a Tombstone move. 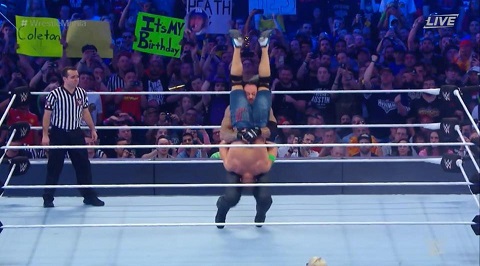 Cena had been calling The Undertaker for the bout since several weeks and he got perfectly what he was searching.

Yesterday Deadman left him no chance but to buy a ticket and watch the show with the crowd. While in between the fans the referee suddenly announced that the Undertaker was in the building. Then, the stage lights dimmed but there appeared Elias. Cena beat Elias and took out his whole frustration before the real match started.

What happened next was thrilling, when undertake hat appeared in the ring of nowhere.  After completing the fireworks the Undertaker proceeds to the ring that grew excitement in the crowd.

As the match between Cena & Undertake was unadvertised it might have left many fans in frustration who didn’t buy the WWE ticket.

Wow...thank you @therealkurtangle the @wwe universe and New Orleans for an unforgettable night #wrestlemania34

Talking about the former UFC champ she won her debuted match and got an overwhelming seal of approval from her fan for winning the first fight.

Rousey ended the match with Baddest Women on the Planet locked in her arm. The crowd went crazy when she carried 15 times world champ Stephanie on her shoulders.