Home Gossip Sex and the City Actor William Garson Paszamant Dies At 57- Cause Of Death? Net Worth & Career Achievements

Sex and the City Actor William Garson Paszamant Dies At 57- Cause Of Death? Net Worth & Career Achievements

Widely famous as Stanford Blatch in Sex and the City franchise (TV series & films), American actor William Garson Paszamant is no more! The Highland Park, New Jersey-born actor died at the age of 57, in the 2021 fall after more than 3 decades of contribution in the acting industry.

Extremely low-key about his personal life, the late actor's death news came forth after his adopted son confirmed it via Instagram. An alum of Yale Drama School, Paszamant notably had acting credits in White Collar, NYPD Blue, and Whole Day Down.

When and How Did William Garson Paszamant Die?

The acting world shooks its head in the loss of a talented actor as the Sex and the City star left the world on September 21, 2021. William, whose birth name was William Garson Paszamant, died after a battle with pancreatic cancer at the age of 57- after 7 months of his birthday.

The late actor's son Nathen (whom he adopted at 7 years old) confirmed the death of the TV screen veteran via Instagram (@nathen_garson). In a series of pictures of his father, Nathen wrote a heartful caption as a tribute; it read:

"I love you so much papa. Rest In Peace and I’m so glad you got to share all your adventures with me and were able to accomplish so much. I’m so proud of you. I will always love you, but I think it’s time for you to go on an adventure of your own. You’ll always be with me."

While the further details on William's diagnosis with cancer are under curtains, Michael Patrick King, the executive producer of Sex and the City, confirmed that the actor was sick for a while. Paszamant was working on the TV projects Duke of the Valley and And Just Like That..., at the time of demise. 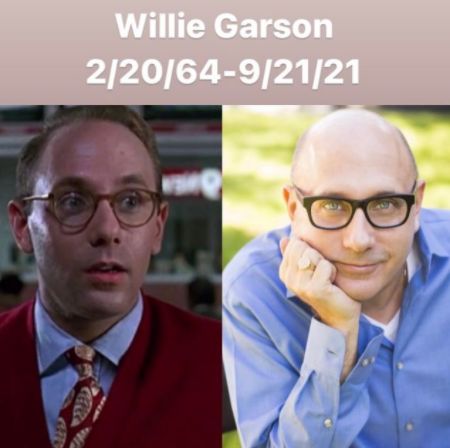 In the wake of the tragedy, his co-star Mario Cantone expressed his grief on Twitter stating he was "devastated and just overwhelmed with sadness."  HBO also released a statement on the departure as a tribute to William Garson Paszamant, mourning the loss of a member of the Sex and the City family for 25 years.

The Freaky Friday actor never married actually or had any biological child from his relatioship. Rather, he adopted a son named Nathen Garson in 2009. Other survivors of the late figure are yet to be out.

Net Worth and Career Achievement Of Garson In 2021

Born on February 20, 1964, to Jewish parents Muriel and Donald M. Paszamant, the Highland Park, New Jersey native was fond of acting from an early age. After graduation from Highland Park High School, William obtained a Bachelor of Fine Arts degree in Theater from Wesleyan University in 1985.

By 1986, Garson turned professional in acting and was active until his death in 2021. With his 34 years long-career as an on-screen aspiring figure, William Garson Pazamant accumulated a net worth of $10 million as of 2021 (at the time of death). Allegedly, the Groundhog Day actor earned a salary in the hefty 6 to 7-digit figure annually.

Some of his films' box-office collection include: