Stephanie is the daughter of Princess Anne’s first husband, Mark Phillips, and his second wife, Sandy Pflueger. Please scroll down to know more details about her personal life, including engagement and fiancé.

Stephanie Phillips, a Worcester-based event rider, started dating agricultural graduate William Hosier in 2019. Just a day before Zara’s 40th birthday, Stephanie announced that she is engaged to her long-term boyfriend. She took Instagram to reveal the happy news.

Stephanie uploaded a series of romantic pictures from the event. As per the post, her boyfriend popped out the question on 9th May. She even flaunted her dazzling oval sapphire and diamond engagement ring. 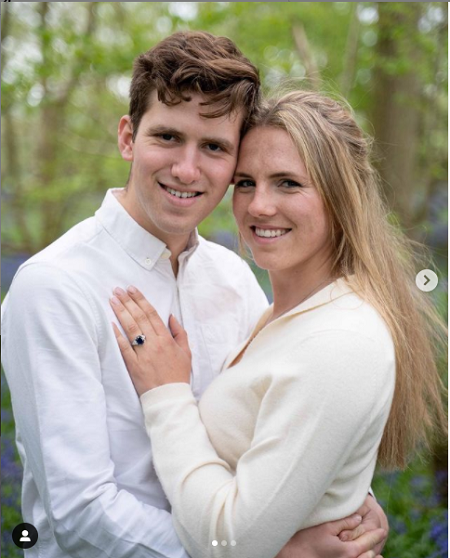 Stephanie looked gorgeous wearing a chic cream top. She credited the picture to Quiet Media, run by Samuel and Tamy Hosier, most likely relatives of Williams.

Like Stephanie’s parents and older sibling Zara, she is also a keen equestrian. While surfing around her Instagram, she has uploaded numerous pictures of her horses. She is a Worcester-based event rider.

Her most success was holding the fifth position at Pontispool in May 2019. As a rider, she has taken part at Barbury International, Wellington International Horse Trials, and the West Wiltshire Trials. Voltaire Design sponsors her.

Stephanie has also completed the bronze and gold Duke of Edinburgh Awards, which her half-sister’s grandfather founded.

Besides this, she is also a keen skier. She is an enthusiastic traveler, and her Instagram is full of pictures traveling across the world, including trips to New Zealand, Slovenia, Croatia, Hawaii, and Australia.

Stephanie studied at the prestigious Dean Close School in Cheltenham, where the fees per term cost up to £13,900.

Upon graduating from CCD at A-Level, she attended the University of Worcester to study Business Management. She graduated last year.

Despite having royal connections, Stephanie has always maintained a low-key profile. She has never spoken up openly regarding her personal life as well as a professional career. She even previously worked at a local pub as a barmaid.

Stephanie maintains a low-key profile but has captured taking part in some royal events like serving flower girl at Zara’s 2011 wedding to Mike Tindall and Peter’s wedding to Autumn Kelly. They seem to share a very close bond where she has mentioned Peter has the best big brother out there.

Besides this, she was seen with her sibling at eventing competitions, where she was captured hugging Zara.