Zara Anne Elizabeth Tindall AKA Zara Tindall is a British royal family member who is an equestrian, Olympian, and the only daughter of Anne, Princess Royal, and Captain Mark Phillips. The 39 years old equestrian is 19th in the line of succession to the British throne.

Zara Tindall, who is married to Mike Tindall, is the mother of three children. The British royal family’s member and her husband have recently spoken up about their bathroom’s birth. Know below:

Zara and Mike are blessed with three children. They welcomed their first child, daughter Mia Grace on 17th January 2014 at Gloucestershire Royal Hospital. Her daughter is 20th in the line of succession. She was christened on 30th November 2014 at St. Nicholas Church. 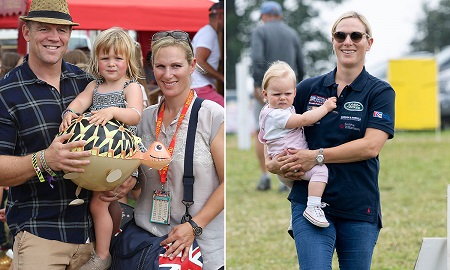 After welcoming her first daughter, she went through two miscarriages. On 18th June 2018, she gave birth to their second kid, daughter Lena Elizabeth, at the Stroud Maternity Hospital, which is on 21st in the line of succession.

While speaking on The Good, The Bad, & The Rugby podcast, Mike revealed their little baby boy at home. He said:

Mike cleared up that he was not one to personally deliver the kid. Opening up the incident with Good Morning Britain, Mike revealed that the midwife got in time, so he did not have to go down to the area. He stayed at the top end, supporting his wife.

Mike described that it was not what they were expecting, but his wife’s friend Dolly controlled the situation until the midwife arrived. He added:

So far — touch wood — he's been great in terms of his sleeping and eating and doing everything that a five-week-old does.

Zara delivered the baby on the bathroom floor as the baby arrived very quickly.

To start from the beginning, Zara met rugby union player Mike Tindall in 2003 during the Rugby World Cup-winning campaign in Australia. During the time, Mike was playing for the England national team.

It did not take long for the couple to know each other and eventually starting dating. After dating for a couple of years, Buckingham Palace announced their engagement on 21st December 2010. During that period, the time required by the Royal Marriages Act 1772, the Queen gave her consent to marry on 10th May 2011.

Mike popped out the question with a custom-designed diamond and platinum ring with a divided diamond band. They celebrated their engagement on the royal yacht Britannia before the wedding.

Zara and Mike got married on 30th July 2011, at the Canongate Kirk, in Edinburgh, Scotland. Around 400 guests attended their special day. Reverend Neil Gardner officiated their marriage.