So, let’s dig into Colleen Ballinger’s personal life, including her married life and kids. Also, get exclusive details on her miscarriage:

The 34 years old shared the happy news in a lengthy YouTube video. Along with sharing the happy news, the comedian also opened up about miscarriage. She also revealed that she suffered a miscarriage after being pregnant at the beginning of the year. 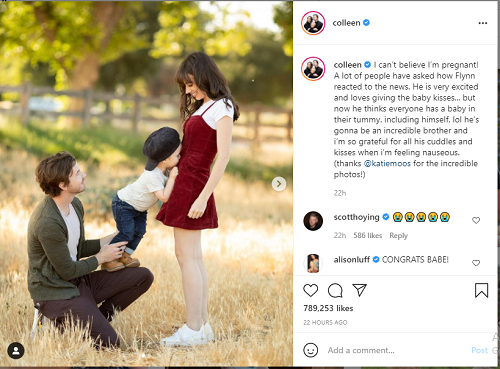 Opening up about pregnancy, Ballinger wrote: I'm just so happy. I wanted this so bad. We're so excited. We really were just trying and hoping for this. This is very exciting.

Immediately Erik and I knew this was something we wanted in our lives, we knew that we immediately wanted to start trying to have another baby.

The star also admitted to taking a million pregnancy tests over the past few months. Her heart shattered when it said negative.

As per her, she is currently two months pregnant and found out the news on 16th April. She is due in December. The YouTuber also said that the baby is healthy and growing perfectly.

When Ballinger shared her experience on previous pregnancy, she admitted that the pregnancy is much worse. During the time, she revealed that she was so sick that she could not film anything.

How Is Colleen Ballinger’s Married Life Going On?

To start from the beginning, Ballinger and Stocklin first met back in 2016 when she cast the latter to play in Haters Back Off. Well, though they sparkled love, at first sight, they did not start dating immediately.

Some sources mentioned that they dated secretly right after. However, as per them, they started dating in early 2018. The duo also got married in the same year.

As of now, they are leading almost three years of married life without any separation issues. They openly post videos and pictures of each other on social media accounts.

The couple has a son together. Their son Flynn was born in December 2018. The duo is now expecting a second kid together.