Who is Jorgie Porter? Who Is She Dating? Who Is Her Boyfriend?

Jorgina Porter AKA Jorgie Porter is a famous English actress and model widely known for portraying the role of Theresa McQueen in the soap opera Hollyoaks. The actress started her acting career in 2008 and is also recognized for appearing in shows like Dancing on Ice, and I’m a Celebrity… Get Me Out of Here!

Today, let’s discuss in brief her professional career and personal life. Has the actress found love? What is her current relationship status? Is she married? Know everything below:

Who Is Jorgie Porter?

Jorgie is a famous English actress and model. She started her professional acting career in 2008 when it was announced that she had joined the cast of soap opera Hollyoaks. She appeared in the role of Theresa McQueen, which helped her grab international attention.

In 2009, the actress has guest appeared in the show Celebrity First Dates. She is also the main cast of the show Celebs Go Dating. She has participated in the television series Dancing on Ice, I’m a Celebrity… Get Me Out of Here!, Hollyoaks Does Come Dine with Me, Celebrity Impossible, Celebrity Haunted Mansion, Are You Being Served?, and others.

As a model, she is signed up with Champions Speakers, MN2S, and the Inter Talent Group. She was the brand ambassador for Teenage Cancer Trust’s annual sun safety campaign and was the face of major international skincare brand Proactiv+.

She also appeared on the cover of First Car Magazine, alongside her co-stars Rachel Shenton and James Atherton.

Is Jorgie Porter Dating Someone?

Talking about Porter’s current relationship status, it seems like the actress is taken. Back in late 2020, Porter opened up about her relationship with new boyfriend, Ollie Piotrowski. During the time, Porter revealed that she is having the best time with him. 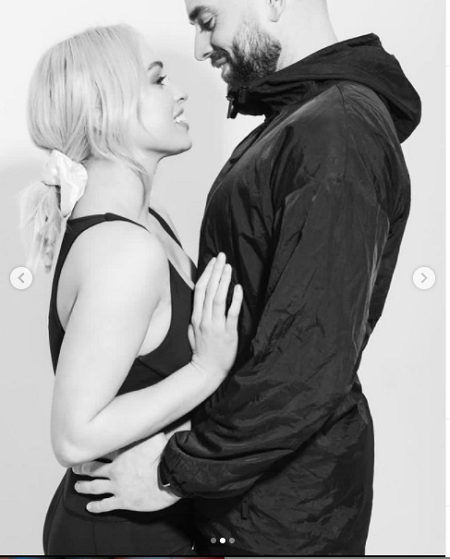 In late October 2020, the 32 years old actress confirmed her relationship with her businessman boyfriend via Instagram. The couple, who is happily dating, is said to have welcome soon.

Porter uploaded a series of pictures with her boyfriend on Instagram, claiming that they are happy together. The news of her romance comes to the media several months after she admitted that she is getting plenty of attention on dating apps. During the pandemic lockdown, she utilized her free time by engaging in virtual dates.

Before dating a businessman, Porter was in a relationship with her co-star James Atherton. The former couple started dating in 2011 but broke up in 2014.