Singer Ariana Grande Is MARRIED!!! Who Is Her Husband? Relationship Timeline!

American singer and actress Ariana Grande, who has won the hearts of millions through his incredible acting and singing skills, is officially off the market. The 27 years old actress is now a married woman.

It came as a shock when Grande announced her marriage with boyfriend-turned-husband Dalton Gomez. Below, we have discussed the newly married couple’s relationship timeline.

Ariana Grande Is A Married Woman!

Yours Truly’ singer has confirmed that she is now a married woman. The 27 years old actress tied the knot with fiancé Dalton Gomez at their Montecito, California mansion. On 17th May, PEOPLE confirmed their marriage.

Grande revealed that they got married in a tiny and intimate ceremony with less than 20 people. The room was full of love where the couple’s families could not happier than this.

In December 2020, Grande uploaded a series of pictures on her Instagram where she flaunted her diamond engagement ring. Her partner is a real estate engagement. 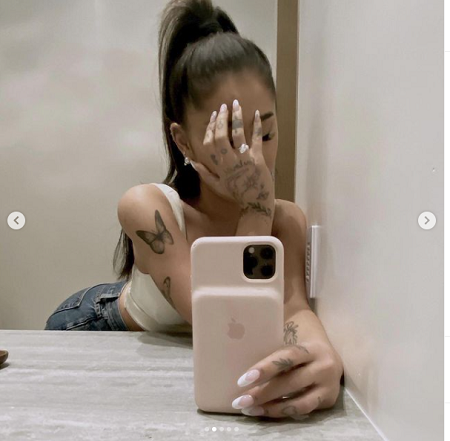 Grande’s relationship with Gomez is the first public romance since she ended her engagement with Pete Davidson back in 2018.

A Quick Look on Grande and Gomez’s Relationship Timeline

The news of Ariana Grande and Dalton Gomez’s romance rumors was fueled on the media back in early 2020. In March 2020, it was confirmed that the singer started dating new boyfriend, Gomez, in January.

In February of that year, they were spotted kissing in Northridge, California bar. TMZ was the

first to confirm that Dalton Gomez was her new man.

An insider revealed that the couple was quarantining together at Grande’s Los Angeles home. During the time, an insider confirmed that they have been hanging out for a couple of months. The source also revealed that the singer does not want a public relationship and wants to keep everything away from the media.

In May 2020, Gomez appeared in the music video for Grande, and Justin Bieber’s song Stuck With U. In the video, we can see the pair flashing big smiles and sweetly dancing and hugging each other.

However, it was her 27th birthday when Grande made her romance official. She shared pictures and videos of her dogs, a childhood photo, and a couple photo.

In late 2020, Grande and Gomez got engaged. Keeping everything away from prying eyes, the couple is happily married. They are enjoying a happy time together.

Back in 2008, Grande started dating actor Graham Phillips. They dated for three years before separating in 2011. From October 2014 to April 2015, she was in a relationship it Big Sean.

After breaking up with Big Sean, she started dating Mac Miller. They broke up in May 2018. In the September of that year, her former boyfriend died from an accidental drug overdose.

In May 2018, Grande confirmed that she started dating comedian Pete Davidson. The following year, they got engaged but called off their relationship in October of the same year.