Jenelle Evans’ husband David Easton is fired from the famous reality show Teen Mom 2 after his offensive tweet against homosexuals and transgender parents on Twitter. While his wife defends him saying that he doesn’t hate LGBTQ people.

Here is the tweet from Eason that shook the LGBTQ community

“And just what makes you think you have the right to tell me how to be a parent? Because you think you know you know me? Lmao why don’t you go tell the homo and transgender parents to start teaching their kids better” 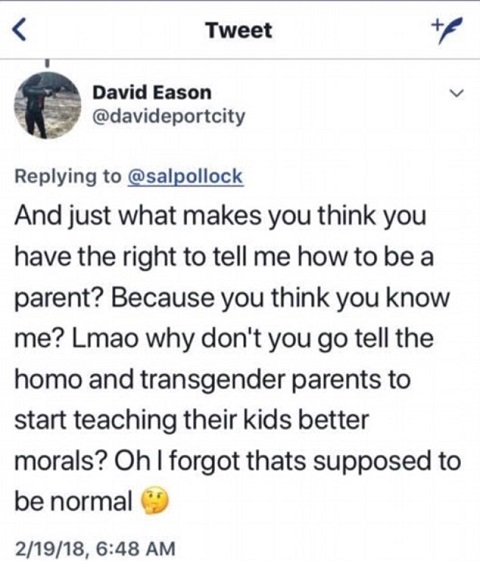 Also Read: Kailyn Lowry Reveals her Pregnancy, Who is the Father of the Child?

MTV on Twitter stated that “we are ending our relationship with him.”

Official statement from @MTVPress: David Eason’s personal comments do not reflect the views of MTV. With six weeks left of production on ‘Teen Mom 2,’ effective immediately, we are ending our relationship with him.

Eason co-star Kailyn Lowry must be happy as she demands that he should be taken off the series. But things are different with wife Evans, she explains to TMZ that her husband was unaware of the twitter power and added actually he is not homophobic.

She continued, now onward he will not comment if he did he will keep it to himself. Despite her best effort, she is unable to secure husband's role in the reality series. The show will start production in 6 weeks.