Khloe Kardashian announced that she was holding a baby girl on the KUWTK. She revealed the gender news on the KUWTK rather than in a social media as she didn’t want to ruin the episode.

Thank you, Lord! Says Khloe for giving her a little princess. The Kardashian family will soon add a new baby girl.

Khloe Kardashian is really shocked learning the gender of her due baby. She must be expecting a baby boy as she tweets that if it was a boy I knew a name. Now better she hurries up and searches a new name for her daughter.

Reality star Khloe was questioned if her new baby name starts with alphabet K, she told K is just an option it might begin with T.

Kylie Jenner and other sisters on a trip to San Francisco collected the doctor result.

Excited Kylie calls Khloe and tells “You’re having a girl!”

Kylie “I’m not lying; I’m so excited for you Khloe!”

Khloe responds in a sound of disappointment” I don’t feel like I’m Having a girl.”

Although, she is excited that she was blessed with a daughter and she will have the best friend like Chicago and Stormi. She praises God for knowing her wish and giving the baby gift in right time. 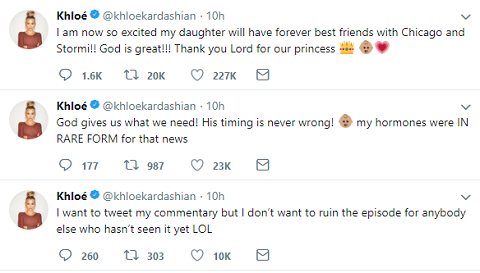 This is the first child of Khloe and her boyfriend Tristan Thompson who has been dating since 2016.