Is Justin Hartley Married To Sofia Pernas? What About His Marriages And Divorces?

American actor Justin Hartley, who started her professional career in 2002, is widely known for appearing in television series like Passions, Smallville, The Young and the Restless, Revenge, and many others.

Everyone might be familiar with Justin’s professional career, but what about his personal life? You might know that the 44-year-old actor is married twice. So, after two divorces, who is he dating? Has he found one?

After two relationship failures, Justin has now found a new partner. He is currently dating his girlfriend, Sofia Pernas. Sofia joined Justin on the television series The Young and The Restless as his nephew’s girlfriend in 2015. They worked together on the series for around a year.

From 2017 to 2019, the two remained friends even after their time on The Young and the Restless. There were numerous romance rumors of the couple on the headlines; however, their romance got confirmed when they were captured kissing at a doctor’s appointment in Southern California in late May 2020.

In July 2020, Sofia hinted that they are going strong as she left numerous comments on Justin’s daughter Isabella’s pictures. In September 2020, Justin’s former wife, Chrishell Stause, acknowledged their relationship for the first time.

On New Year’s Eve 2020, Justin and Sofia made Instagram official. Sofia shared pictures with her boyfriend on Instagram, writing: Happy New Year from our quarantine den to yours. 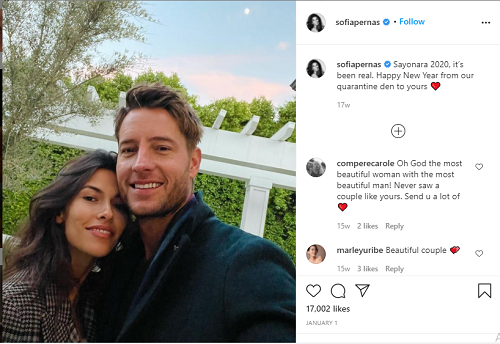 CAPTION: Justin Hartley and Sofia Pernas are rumored to be married SOURCE: Instagram

Sofia gushed on Instagram on his birthday, writing: That smile!!! Lights up my sky. Happy Birthday, [darling].

Recently, as per Daily Mail, Justin and his girlfriend, Sofia, were captured wearing wedding bands on their ring finger in Malibu. The actor was seen wearing a red ring on his left hand, whereas his girlfriend had a silver band. It is speculated that the duo might have tied the knot in secret.

His Past Relationships And Marriages

Red Canyon’s star has been married twice and divorced in the same number. Back in 2003, Justin started dating his Passions co-star Lindsay Korman. Just after six months into dating, Justin popped out the question on 13th November 2003.

On 1st May 2004, they exchanged the wedding vows in a small ceremony. The former couple is blessed with a child. On 3rd July 2004, Lindsay gave birth to their first child, daughter Isabella.

Sadly, even after being married for eight years, their conjugal life did not work out. On 6th May 2012, Lindsay filed for divorce in the Los Angeles County Superior Court. She mentioned irreconcilable differences as the reason behind their separation.

In January 2014, Justin confirmed his relationship with Chrishell Stause. Two years later, in July, the two took their relationship to the next level. They got married on 28th October 2017.

Sadly, in November 2019, Justin filed for divorce, citing reconcilable differences as the reason behind their separation. Their divorce was finalized on 22nd February 2021.

During an interview published on 30th September 2020, Chrishell opened up about his ex-husband.  In the interview, she mentioned seeing her ex-husband’s new relationship.

SEE: Is Sofia Pernas Single or Married? Know her Affairs and Relationship