Is Imogen Anthony Dating Someone After Kyle Sandilands? Details Of Their Scandalous Relationship

Imogen Anthony is a rising model who grabbed international attention for her relationship with Australian radio host Kyle Sandilands. As per numerous sources, the 29 years old model has moved on after her split from Sandilands.

So, has Imogen Anthony found love again? Who is she dating again? Who is her new boyfriend? Scroll down to know everything below:

Who Is Imogen Anthony Dating?

Back in December 2020, it was announced that model Imogen Anthony has moved on. During the time, the 29 years old model took her Instagram to hint that she has moved on and has already found love again after more than a year of breakup with Kyle Sandilands.

Imogen posted a picture on Instagram of herself lying face down a bed wearing black and orange two-piece to the post, which she captioned: you + me. However, during the time, she did not reveal the name and face of her boyfriend.

It seems like Anthony and her mysterious boyfriend are going strong. While surfing around her Instagram, back on 14th January 2021, she posted a series of pictures of her partner, hinting that they are happy together.

In the post, Imogen explained that her partner keeps her safe and also saves animals. She wrote: he’s pretty wild too. 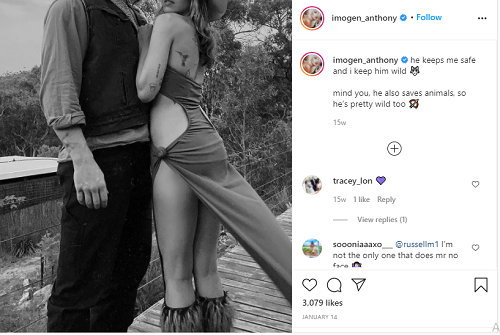 Anthony grabbed international attention when she started dating radio host Kyle. Sadly, the former couple broke up in mid-2019 after being together for eight years.

When the former couple first announced break-up, it appeared to be amicable, but things did not go well. During the break-up, Anthony accused her former boyfriend of sending her mixed messages in a cryptic post on Instagram in May.

Explaining more about their break-up, Anthony revealed that Kyle had sent romantic gifts even after their break-up, which added a huge confusion to her. She even once posted a private text of them before quickly deleting them.

Anthony revealed that her former boyfriend gave her false hope, thinking of rekindling their relationship, but, later, she realized that reconciliation was not on the cards.

Anthony once revealed that she stayed silent about the circumstances of their rift. She said:

Everything I have said has been the truth or what I was told directly.

Australia’s Got Talent’ former judge announced the break-up back on 5th November 2020. During the time, he also revealed that they have not been living together for quite some time. Meanwhile, on New Year’s Eve, Kyle debuted his relationship with a former personal assistant, Tegan Kynaston.

SEE: Kyle Sandilands and wife Tamara Jaber Now No More Together, Know their Affairs and Relationships