Holliday Grainger Has Welcomed Twins; Her Married Life And Kids!

Holliday Grainger is a famous English screen and stage actress who is known for appearing in the role of Kate Beckett in the television series Roger and the Rottentrolls. The 33 years old actress, who has appeared in Strike as Robin Ellacott, has given birth to twins.

So, who is the father of Grainger’s twins? What is her current relationship status? Is she married or dating her boyfriend? Scroll down to know everything:

The Capture’s star has given birth to twins. She welcomed kids with her partner Harry Treadaway.

The parents of two kids were spotted enjoying a stroll with their newborn kids in Devon, where the pair soon moved after they knew she was pregnant. The duo was keen on cradling their babies in papooses to protect them from the weather while they were enjoying window-shopping before having lunch at a small café. 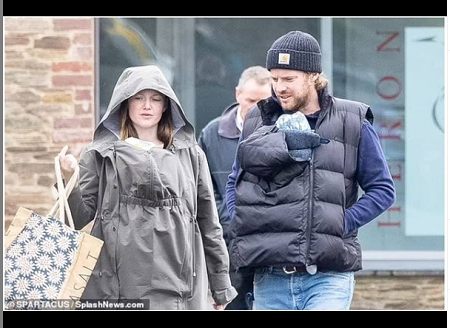 As per Daily Mail, last September, the pair kept their work on the second series on hold due to pregnancy. However, it was not known until that the 33 years old actress was expecting twins.

The news might be an extra special one for her partner Harry, as he is an identical twin.

Are Grainger And Treadaway Married?

Well, Grainer and Treadaway are not married at all but are in a long-term relationship. As per gossip mongers, the couple started dating in 2015 and has been inseparable since then.

The couple often posts pictures of each other on social media accounts, expressing love for each other.

Before dating Harry, Grainger was in a relationship with Francois Arnaud. As per sources, they started dating in 2011 but broke up the following year.

Similarly, back in 2007, Awaydays’ star bean dating Luke Bailey. They dated for four years before breaking up in 2011.

Grainger started her professional acting career as a child actor appearing in many television series and independent movies. She was only five years old when she was scouted for a BBC television series.

Since then, the actress has worked in over dozens of television series like All Quiet on the Preston Front, The Royal, Doctors, Casualty, Roger and the Rottentrolls, No Angels, Where the Heart is, The Capture, Patrick Melrose, Lady Chatterley’s Lover, Strike, Five Daughters, Blue Murder, Robin Hood, Stanly Park, The Borgias, Any Human Heart, Bonnie & Clyde, and others.

Similarly, she has appeared in movies like Animals, Great Expectations, Jane Eyre, The Scouting Book for Boys, The Bad Mother’s Handbook, Dis/Connected, Awaydays, Anna Karenina, The Riot Club, Cinderella, Tulip Fever, Home, Tell It to the Bees, The Finest Hours, My Cousin Rachel, and many others.

As of 2021, Holliday Grainger’s net worth is reported to be around $5 million.