So, who is the mother of his first kid? Is he married or dating his girlfriend? Scroll down to know more about his personal life:

Jaden Hamilton Is A DAD!

The 20 years old video content creator has become a dad. He has welcomed his first child, Ryder Rhett Hamilton, on Friday, 14th May 2021, with Lilyan Cole. Their first kid was born at 12:58 a.m. in Nashville. The baby weighed 6 lbs 9 oz and was 18 inches tall. 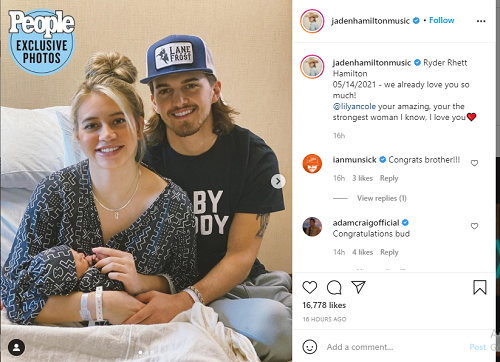 The couple announced the pregnancy back in December 2020. Hamilton posted on Instagram to reveal the happy news. In the post, the singer claimed that it had been tough keeping everything quiet. He said: it's so crazy to say, but we're gonna be parents!

In the same post, Hamilton admitted that he couldn’t wait to meet the little baby. He concluded the post by thanking for making 2020 worth it.

On the other side, his girlfriend claimed that the sickness, aches, cravings, and kicks were beyond worth it. She wrote: Gods not only blessed me with Jaden this year. I'm ecstatic to bring y'all along on this journey with us! We're so ready to meet this bean.

In January 2020, the duo uploaded a video on YouTube to reveal the sex of their baby. In the video, we can see the couple smashing a guitar to reveal pink dust inside. 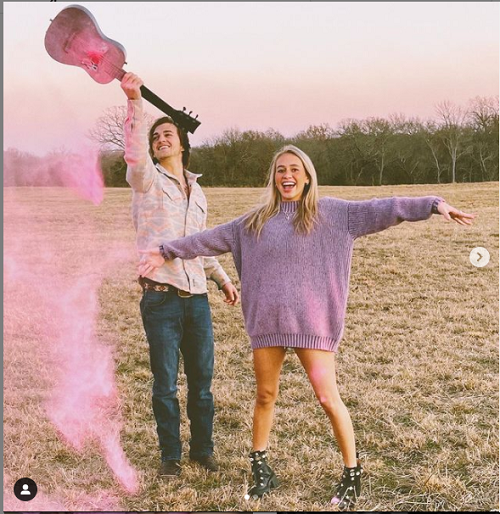 However, a couple of weeks later, it was confirmed that the pair were expecting a baby boy via an ultrasound.

For your information, Hamilton is neither married nor engaged. In the recent pictures, Hamilton has referred to the mother of his son as girlfriend, which clearly proves that he is not married and not engaged at all.

Hamilton is in a relationship with Lilyan Cole, who is a model. It is revealed that they started dating in early 2020.

His girlfriend is a successful American model who grabbed attention for appearing on Lifetime’s reality television series, Making a Model with Yolanda Hadid, on its first season. She walked in 11 fashion weeks from LASFW to NYFW before she turned eighteen years old.

She even had worked with Gigi Hadid on the TommyxGigi Collection. She is 5 feet 7 inches tall and has a slim body build.

On the other side, Hamilton made YouTube debut in April 2019, uploading a cover of Jason Aldean’s Black Tears. He is a singer-songwriter and video content creator who found success in TikTok.

One of Hamilton’s most watches YouTube videos is Hurricane-Laine Hardy/Band of Heathens in 2019.