Who is Nicole Scherzinger Dating Currently? Details About her Relationship and Dating History

American singer-songwriter and television personality Nicole Scherzinger started her professional career in 1997 and is widely known as the lead singer of American girl and dance band the Pussycat Dolls. As a television personality, she has served as a judge on multiple television shows like Australia’s Got Talent, The X Factor UK, and The Sing-Off.

There is no doubt that Nicole has a successful professional career, but what is her personal life? Who is her current boyfriend? Has she walked down the aisle? Know everything:

Who Is Nicole Scherzinger Dating?

If you are Scherzinger’s fans, then you have definitely known that the actress is not single. She has openly talked about her relationship and flaunted her boyfriend on Instagram. As of now, she is in a relationship with Thom Evans.

Nicole and Thom, who first met on the set of The X Factor: Celebrity, romance sparked back in late 2019. During the time, the singer judged the show alongside Louis Walsh and Simon Cowell. 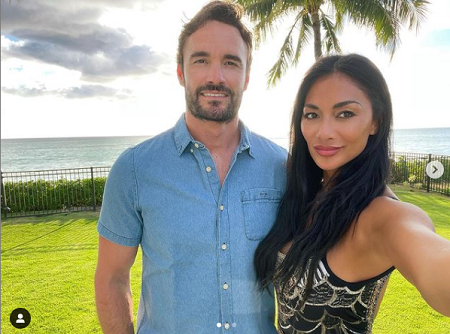 The duo started flirting as the season went on. As per sources, she went wild when Evans stripped off his shirt during a performance of X Ambassadors’ Boom.

After the finale of the show that aired in November 2019, they started hanging out. They were often seen together. At one point, they were seen kissing at a bar in London. In early 2020, they made their red carpet debut at the 21st annual Instyle and Warner Bros. Pictures Golden Globe Awards afterparty.

Soon after, the couple heated the media posting pictures together on Instagram. They entertained their fans on their daily activities in quarantine during the COVID-19 pandemic.

In February 2020, the pair held hands after dinner at Catch restaurant in West Hollywood. The following month, they did yoga together in the UK. The same month, they also recorded their first TikTok video together.

In April 2020, the pair covered Shania Twain’s You’re Still the One, celebrating Evans’s birthday. On the occasion of Father’s Day, Evans uploaded a picture of the couple alongside his parents.

In 2007, she was in a relationship with Dane Cook but dated for a very short period of time. In 2008, she dated Lewis Hamilton. They dated for seven years. In 2015, she was linked with Pajtim Kasami and Ed Sheeran.

Do you know Scherzinger was once engaged? She was engaged to Grigor Dimitrov from 2016 to 2019.