Home Gossip Who is lesbian model Azmarie Livingston dating after her split from girlfriend Raven Symone?

Who is lesbian model Azmarie Livingston dating after her split from girlfriend Raven Symone?

Who is lesbian model Azmarie Livingston dating after her split from girlfriend Raven Symone? Here is the latest update.

For once Raven-Symone was making headlines for not putting her foot in her mouth on The View.

After model Azmarie is broken up with her long-term girlfriend Raven-Symone, it is of general curiosity about who is she dating now. The girls have been dating since 2012. 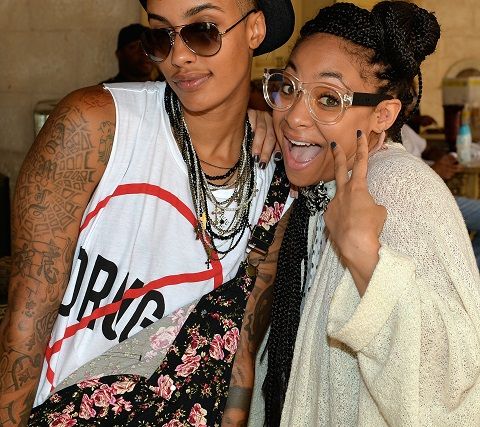 In 2014, Azmarie’s partner shared with US Weekly about having an amazing happy relationship with female partner aka Azmarie. And now after a year later they split up.

According to US Weekly, Raven was still confused about her sexuality, so this may be the reason behind their break up. The gossip even follows that she was planning to get married and know how it is like having a husband.

Now there is no official news of Azmarie dating anyone officially but we are not so sure who she is having romance behind the scenes.

Azmarie is an avid user of Twitter and Instagram. She keeps her fans updated with the latest news feed. However, she is secretive when it comes to her personal issues.

But this time she shares openly about her breakup with Raven. When the fans asked about how she is doing after the break-up. She posted the following on Twitter.

“It's imperative that people continue to grow & allow change”.

By this, we can infer she is doing just fine and embracing this change positively.

Azmarie Livingston is a popular lesbian fashion model, actress, and singer. She rose to fame after appearing on America’s Next Top Model British Invasion in 2012. Recently Azmarie was cast to play the role of Chicken on Fox’s new hit show Empire that aired in January 2015.

Azmarie has a career in music, acting, and modeling. If we have to say she rocks in all of these three.She is currently a recurring character on Fox Network’s new hit show Empire as Chicken as Hakeem’s best friend and DJ.

In 2009, she appeared in the award-winning movie Precious. In 2010, she went on to appearing tv shows The Real Housewives of New York City and The Jacksons: A Family Dynasty. Her new movies are yet to come in 2018.

After her stint on Top Model, Azmarie acquired a role on gay tv series DTLA. In the series, she worked alongside actresses Melanie Griffith and Sandra Bernhard. She plays the role of Ricki, who is Griffith’s girlfriend on the show. In her breakthrough role, Azmarie says, "Being a rookie with all-stars made me a little nervous, but I don't think I showed it."

As already mentioned she has a nice career in music too. Before getting along on her solo career, Azmarie started out as an extra in several music videos, including Kelly Roeland’s and Nikki Minaj’s “Moment 4 Life”. She released her debut single “Morning Guarantee” in December 2012.