Home Gossip Who Is Kyle Richards's Husband? Who Is She Married To? Her Kids?

Who Is Kyle Richards's Husband? Who Is She Married To? Her Kids?

American actress, television personality, socialite, and philanthropist Kyle Richards started her professional career in 1974. The 52 years old television star came into the spotlight for appearing in movies like The Watcher In The Woods, The Car, and Eaten Alive.

Richards’s professional career is easily available on the internet, but what about her personal life? Is she married to anyone? What about her children? Know everything below:

Kyle Richards Is A Married Woman!

The 52 years old actor is a married woman. Her husband is Mauricio Umansky. Her partner is a real estate agent and is the son of Estella Sneider, Mexican television and radio personality, author, socialite, and psychologist. As per sources, the couple first met in 1994.

After dating for nearly two years, Richards and Umansky got married on 20th January 1996. During the time of their marriage, the actress was four months pregnant with their first child.

The family of five resides in Encino, Los Angeles, and maintains a healthy familial relationship.

Who is Kyle Richards’ Husband?

Richards’ husband Mauricio Umansky is a famous Mexican-born American real estate agent and television personality who grabbed international attention for his relationship with her.

Umansky was born to father Eduardo Umansky, and mother Estella Sneider. His dad is a real estate developer, whereas his mother is a psychologist, author, and radio and television personality. He studied at the University of Southern California. 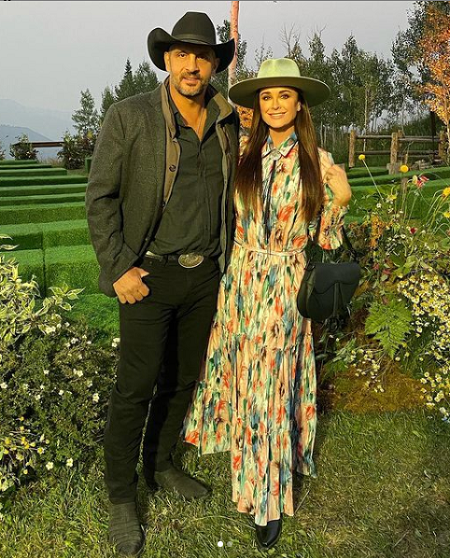 Upon graduation, the celebrity spouse began his own clothing company, 90265. He began working as a real estate broker for Hilton & Hyland. He is also the founder of The Agency, which deals in real estate worldwide.

As a television personality, Umansky has appeared on television shows like CNN Money and Fox Business. Similarly, he has appeared on ABC Family’s Job or No Job and Erich!’s Kids of Beverly Hills. Once, he was dragged into the controversy when Sweetwater Malibu LLC accused him and his company of a federal lawsuit for selling over a $32 million worth mansion in Malibu.

As per sources, the mansion was sold for $32.5 million to Mauricio Oberfeld. The house was later sold for $69.9 million, where Mauricio took offers in excess of $33.5 million.

Talking about Umansky’s personal life, he is a fantastic golfer and loves to spend most of his time outdoors. He loves wakeboarding and skiing to relax.

Kyle Richards Was Married Previously Before Tying The Knot With Current Husband!

Police Story’ star Richards was married for the first time when she was only eighteen years old. She was married to Guraish Aldjufrie from Indonesia in 1988. During the time, she was pregnant with their only child, daughter Farrah Brittany. She was born on 31st October 1988.

Sadly, just after two years of tying the knot, they separated in 1990. Their divorce was finalized two years later.