Home Gossip The Great Khali is head over heels in love with his wife, Harminder Kaur, who he has been married to since 2002.

The Great Khali is head over heels in love with his wife, Harminder Kaur, who he has been married to since 2002. 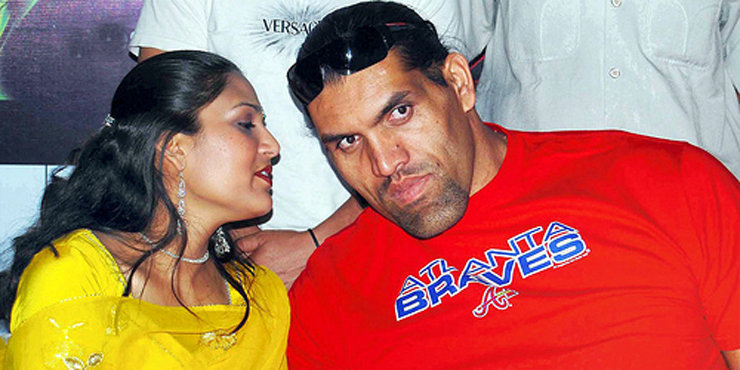 Popular professional wrestler The Great Khali is a very passionate and loving individual who is deeply in love with his wife even after being married to her for over a decade and more.

Khali’s wife Harminder Kaur is the love of his life, something he has mentioned time and again to media and fans all over the world.

Khali prides himself of being a family man and has said one of the most beautiful things of his life is his wife.

Due to her beauty, simplicity and warmth that she possess. Also he has said he receives from her unconditional love which is all he desires from her.

Khali and his wife live is what is called a joint family and is believed that he loves children. However he so far has not conceived children with his wife but rumor has it that he and his wife may be looking to start a family with lot of children in the near future. Which could be as near as the end of this year too.

Khali also happens to be philanthropist who has understood the difficulty of people in poverty first hand. After he gained fame and fortune, he did not neglect his fellow people but rather helped his community in every way he could.

By now he has already build schools, hospitals and places for recreation for public in his hometown.

He is very loved by his fellow community members who have hailed him as a social hero. Khali has said he lives according to the typical Indian culture and is a devoted religious man and believes strongly in the bond of friendship and love.

He married his wife over a decade ago and the love between them is still as strong as ever. It is even believed that Khali maintains his awesome size on a strictly vegetarian diet being a devoted Hindu.

However some interviews have claimed that he is known to consume vast quintiles of chicken. Khali personally has said although he is a vegetarian he does not refrain himself from non-vegetarian cuisines.

Khali has also had a successful career outside a ring as an actor in movies, TV shows and reality TV. Some of his most notes worthy performance in movies have come from “The Longest yard”, “get Smart”, “Khusti” and “Ramaa: The Savior”.

He has featured in TV shows and reality TV shows “Big Boss (the Indian version)” and has had cameo appearances in “Outsourced” and “Pair of Kings”.

His salary has been estimated to be somewhere around $300,000 per year. However his net worth is much higher at around $1.5 million.

He has made most of his earnings through his professional wrestling career and also through his various endorsements In India.

WWE diva Kelly Kelly in the cast of WAGS, along with her husband-to-be Sheldon Souray