Home Gossip The Bold and the Beautiful star Courtney Hope and General Hospital star Chad Duell Marry In 'Till Death' Themed Wedding: When Did The Couple Start Dating? Find Out More About Their Relationship

The Bold and the Beautiful star Courtney Hope and General Hospital star Chad Duell Marry In 'Till Death' Themed Wedding: When Did The Couple Start Dating? Find Out More About Their Relationship 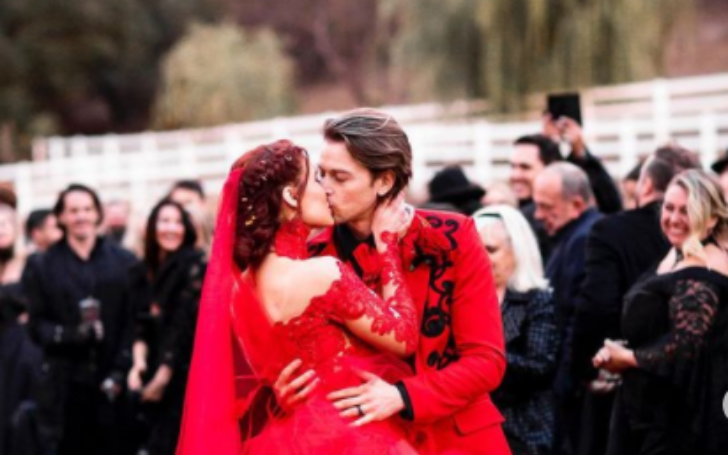 Courtney Hope, 32, and Chad Duell, 34, exchanged their wedding vows in a dramatic yet beautiful "Till Death" themed outdoor wedding on 23rd October 2021.

The couple began dating in 2016 and got engaged on Valentine's Day during a Malibu beachside picnic. In an interview with People, Hope opened about the proposal and said:

"He then told me to close my eyes and turn the other way 'cause he had to 'set something up.' Then he comically fumbled behind me to distract me from what he was really doing — and when I turned around, he was on his knee!"

The Young and the Restless actress and The Bay actor tied the knot in 'Till Death' goth-themed wedding in Malibu on 23rd October 2021. The newlyweds were clad in all red gown and suit, while the guests honored the theme and wore an all-black look.

Hope wore a long flared Victorian gown with mesmerizing scarlet lace details with a voluminous tulle by Adolfo Sanchez whom she thanked on Instagram for bringing her vision of choker tear-away dress, her lace legging boots, and Till Death veil. 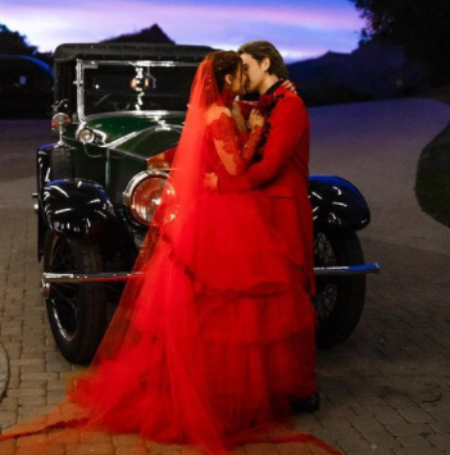 In the caption, she also added: "I’ve visualized this dress for years and he exceeded expectation! And thanks for honoring @duelly vision as well! You’re a rockstar and I felt like a damn queen!! Love you so much!"

On the other hand, Duell rocked a red suit featuring black embroidery and a rose boutonniere.

General Hospital star proposed to his girlfriend of five years in February on Valentine's Day during a beachside picnic in Malibu.

Hope later talked about the proposal and said it was unexpected but 'better than I ever imagined!'. She also added: "He's so romantic, so when he planned a picnic I wasn't too thrown off."

On the other hand, Chad expressed his excitement saying: "I had a strong feeling she'd say yes, but I was naturally a little nervous. I also just really hoped she liked the ring."

The couple was first introduced by Chad's co-star Bryan Craig. Their chemistry took off and the pair eventually started dating in 2016. 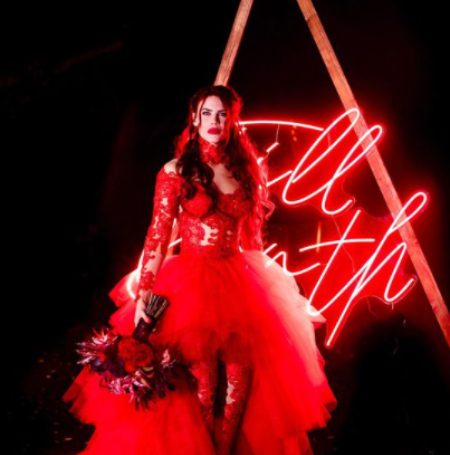 In an interview, Hope shared her future plans and said she was excited about the new chapter. She said:

"Just getting to create memories forever, our future children and family, the places we'll travel and all the laughs we'll have makes me so thrilled to think about. I enjoy every day with him, so each present moment is beyond fulfilling,"

Similarly, Duell talked about his married life saying: "It's a whole new step and a lot of excitement for our future. I get to call her my wife! I'm excited for a lot: our future kids, new adventures, a new home, and having my best friend to grow old with."