Take a peek into actress Bridgette Wilson's married life. Is she happy?

The real one true pair are those who actually stuck up with one another in spite all the shortcomings in life. Bridgette Wilson and her tennis champion husband Pete Sampras is also among them.

The pair got married in the year 2000, and still have the same magic that they had 16 years ago. The story of how it all started is even more special than what we all expect it to be.

Pete Sampras talked about his and Bridgette’s sweet little love story with the InStyle Magazine. The 29-year-old Pete saw his future wife Wilson in a movie theater in L.A. Pate recalled:

I said to my friend, half-kidding, 'I'd love to meet her,

The friend got Bridgette’s number and the date was set. However, the former Miss Teen USA, Bridgette was not that keen on tennis so she didn’t even know who Pete was.

Also, read Tennis great Pete Sampras and wife Bridgette Wilson on the verge of a divorce??

Bridgette has also shared his words for about their relationship

"I had never watched tennis, so I wasn't familiar with him," she recalled to the magazine. "But when I saw his picture, I was like, 'Oh yeah, he's a cutie.'"

Who knew that 9 months they’d be an officially married couple whose relationship would be as strong as a rock for a lifetime?  Throughout 16 years of their married life, never have they ever left one another’s side or ceased to be each other’s pillar of support! Remember that little note Bridgette wrote to Pete during the Wimbledon in 2002? Totally worth it!

Bridgette Wilson and Pete Sampras have two children together; Christian Charles Sampras and Ryan Nikolaos Sampras. In 2014, the couple bought the formerly Albert Brooks owned 2 acres of Bel Air estate for a value worth of nearly $6 million.

Prior to this, the Sampras owned a modern property in Thousand Oaks, California. Following their real estate splurge were rumors of the couple’s separation. 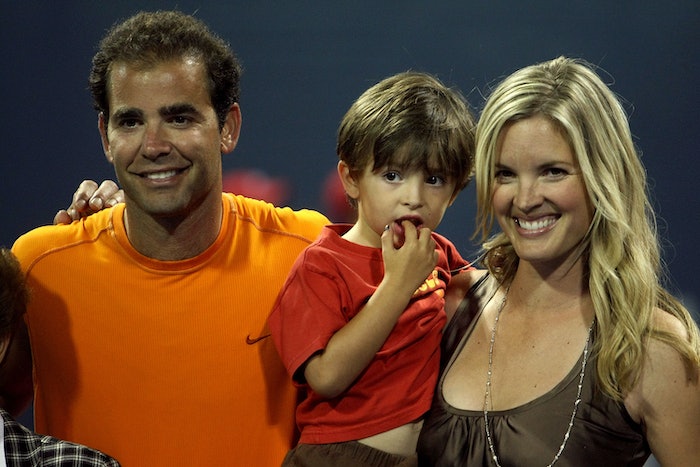 Rumor had it that the duo was having trouble in their marital paradise and was nearing a divorce but fortunately, those were just rumors and the Sampras are still together as strong as ever!