Home Gossip Singer B.J. Thomas Is No More; Cause Of His Death Revealed!

Singer B.J. Thomas Is No More; Cause Of His Death Revealed! 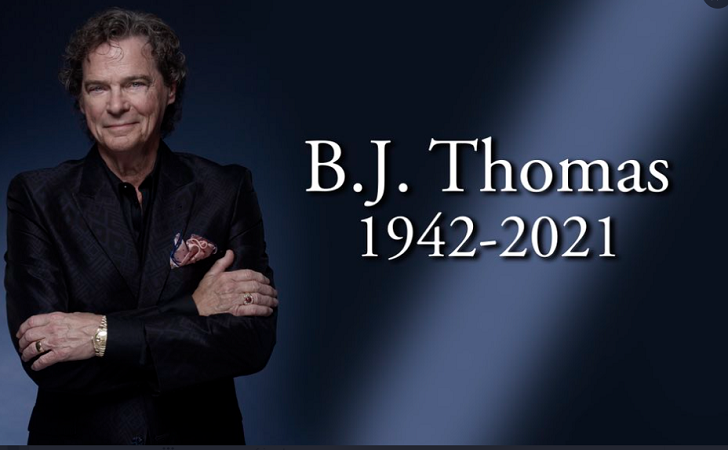 American singer Billy Joe Thomas AKA B.J. Thomas, who is widely known for his pop, country, and Christian hits back in the 1960s to 1970s, is no more. The legendary singer died at the age of 78.

So, what is the real reason behind Thomas’s death? Along with it, have a look at his professional career and personal life. Scroll down to know everything:

The Grammy-winning, who grabbed attention for his like Hooked on a Feeling and Raindrops Keep Fallin’ on My Head, is no more. The legendary singer died at the age of 78.

The late singer’s representatives Jeremy Westby and Scott Sexton confirmed that the star died at his home in Arlington, Texas, on 29th May. The cause of his death is reported as lung cancer complications. His official Twitter account also confirmed the news.

The post read: It is with profound sadness we confirm the passing of BJ Thomas. 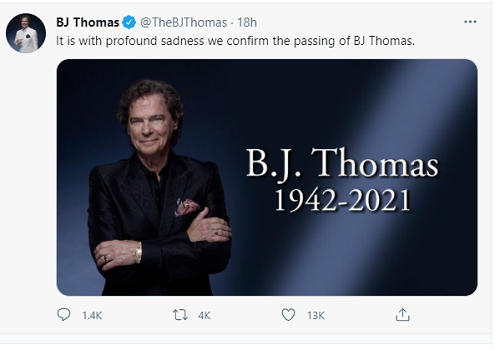 Back in March, the singer was diagnosed with stage four lung cancer. He was receiving treatment in Texas.

His Personal Life; What Was His Relationship Status During Last Days?

The legendary singer, who once became dependent on drugs and alcohol, was married to Gloria Richardson, who is a singer and songwriter. As per sources, the couple got married in December 1968 after dating briefly.

Shortly after Thomas’s professional career skyrocketed, he started using drugs. He became dependent on drugs and alcohol. His drug addiction and alcoholism became one of the main reasons behind almost ending his marriage.

As per gossip mongers, the couple once separated but later reconciled in 1976. After reconciliation, he started leading a sober life.

On 28th January 1976, he became a Christian, less than a month after his wife did.

Thomas was born on 7th August 1972 in Hugo, Oklahoma, the United States of America. He grew up in Houston, Texas. He studied at Lamar Consolidated High School. As a teenager, he had sung in the church choir. He later joined the musical group The Triumphs.

Thomas officially started his musical journey in 1966, releasing albums I’m So Lonesome I Could Cry and Tomorrow Never Comes. Some of his famous albums like Once I Loved, The Living Room Sessions, O Holy Night, Love to Burn, Now and Then, Still Standing Here, Scenes of Christmas, Reunion, Country, Most of All, Everybody Loves a Rain Song, Happy Man, and many others.

Gossip mongers revealed that he had a net worth of $5 million during his last days.