Home Gossip Shocking Amphibious Vehicles You Might Not Know. Find out Now!

Shocking Amphibious Vehicles You Might Not Know. Find out Now! 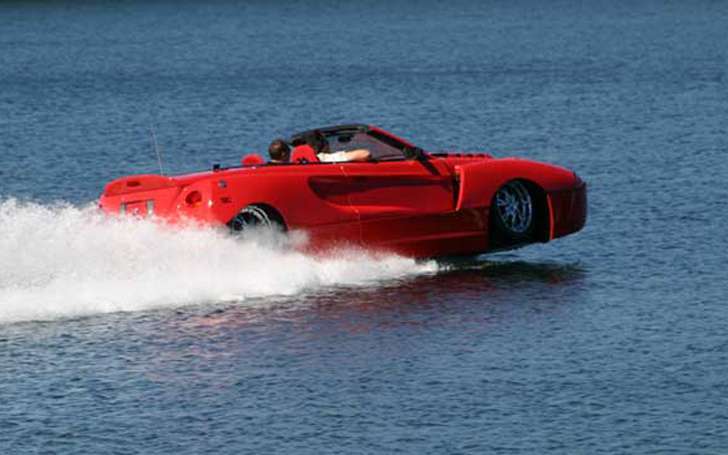 Do you like surfing in water? Or do you love to go out with friends for Jet Skies? Well, you are now living in the 21st century and you could fulfil those wishes at ease. The flying cars were something extraordinary which we saw before, but what about vehicles that could run both on water as well as land? Sounds very good!

Here is the list of such amphibious vehicles introduced, that run on both water and land.

Look at this giant truck, obviously not a children toy. Sherp ATV is the Russian tech, which is sized of 5 feet when fully inflated. This vehicle is designed in such a way that it could travel in any terrain at the maximum speed of 28 miles per hour.

With over two feet of ground clearance, this vehicle could easily pass through a difficult landscape, even in snowy road, or in the deep forest. The ATV features self-inflating tires that could adjust in a different ground. With the capacity of 58-litre fuel tank, this model provides a mileage of 2-3 miles per litre.

But here’s an interesting fact, the vehicle can easily run in the water like on land. The tires with air help ATV to float in water. The large ridges in tires act as paddlers for surfing in the water. This vehicle could ramp off at the speed of 3.7 miles per hour.

The Sherp ATV costs $65000 for its base model. This vehicle is perfect for those who want to go anywhere.

This masterpiece is designed to work on both water and land. This model uses the old paddle system like of old ships that help vehicle to move forward in the water. Although the size of this particular vehicle is similar to a tank, it floats in water like ships do.

The UHAC is made similar to the design of tank tracks fitted with air foam cells that act as a paddle at water and wheel on land. The full sized model is able to deliver up to 200 tonnes of heavy equipment from ship to shore tripling the capacity of hovercraft.

This massive vehicle could kick out US military delivery tanks when released.

If you are someone who loves motorcycle along with Jet Ski, this might be the perfect vehicle for you. Allen Gibbs of Gibbs Amphibians had made your dream come true.

Biski is the perfect hybrid bike that could be used as a bike on land and Jet Ski on water both. This bike is so cool that even 007 James Bond would like to try. As you ride into the water, a simple button will transform your bike to Jet Ski. It will take merely 5 seconds to switch bike engine to a propeller.

When you get into the water, the dynamics of the bike lifts up the front area for easy navigation of the vehicle. The Biski could beat the normal Jet Ski when is on water. The maximum speed of Biski on water is 37 mph and 80 mph on land.

Quadski is yet another innovative vehicle by Gibbs Amphibians that works with a similar concept as of Biski. This is the very first sports amphibian that works on both land and water. The speed of this vehicle is clocked at 45 miles per hour in either environment.

Like of Biski, the wheels of Quadski retract with the push of the button while entering in the water. When approaching land, same procedure works in reverse. This model comes in both one-seat and two-seat version.

If you are visiting the Netherlands, you might be lucky enough to see the bus going inside the water canal. Don’t be surprised or don’t think it as an accident, because Splash Tours have started the float tours, that you should try. Splash tours buses are certified to be watercraft.

How about visiting Amsterdam instead? There exists another amphibious bus named Floating Dutchman that detours you through Amsterdam canals.

The final amphibious vehicle, WaterCar Panther is one of the most exciting amphibian vehicles ever invented. With a serious speed of this car on both water and land, this vehicle is perfect for those who love water and land sports.

This vehicle’s base is CJ8 Jeep, featuring Honda Acura engine, fibreglass, retracting wheel and a powerful jet board drive. Using it for sports, off-roads, or for fishing, you could use it as you like. With the speed of 45 miles per hour in water, you could also race with Jet Skies or Yacht.