Shemar Moore clears up the rumor about him being Gay. Know about his Affairs and Girlfriends

Just because someone is spotted with the same sex then that means he is gay? Hahaha, How ridiculous!! The above statement is just so exact in the life of Shemar Moore. Shemar Franklin Moore is an American former fashion model and actor who is best known for "The Young and the Restless".

There was various news of Shemar's gay being published in the media. After numerous news and rumors, Shemar Moore finally spoke up about the topic. Know what started him to drag into the gay controversy and rumors. Check it out:

How did the Gay Rumor start?

The gay rumor of Shemar Moore got sparkle when he was spotted hanging out with a fan. He was actually hanging out with a fan in LGBTQ nightclub and it was all captured in the video. Since he is a popular celebrity, his video got posted on the social sites. Then everyone started claiming that he is actually gay which created some curiosity in fans regarding his personal life. 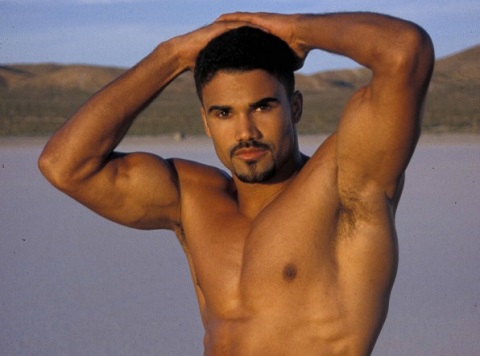 After various news and rumors got published in the media regarding his homosexuality, he then took help of Instagram and pleaded everyone to stop all those rumors. He mentioned clearly that there is no proof to label him as gay. He clearly explained that he wants all those gay rumors to end up at once.

Shemar Moore says he is not Gay

Even though after his post to stop the gay rumors on Instagram, it didn't actually end there. Moreover, the rumor was taken to the next level which really made the actor too frustrated. The Bounce Back actor then shared his views with BET.com. When he was asked about all those gay rumors, he replied:

'I just think it’s all silly. If you're gay, you're gay. I'm not, and I know that and I'm very comfortable with who I am and I love women.

'I've dated plenty of them. If you think I'm gay, send your girlfriend over to my house for the weekend and see what happens. For real,

'You can call that arrogant if you want to. I just call it confident. You can call me whatever you want, but you don't know me.'

Also, for your kind information, as indicated by whosdatedwho, Shemar Moore has already enjoyed 9 relationships in total. None of them are boys so how can someone claim that he is gay? He has dated Sanna Lathan, Toni Braxton, Bobbie Phillips and more.

Trust Me.... Keeping this secret is killing me.... in time BABY GIRLS, HOMIES, n FANS... in time.... not too much longer... HAPPY VALENTINES DAY

Peace Out Toronto... Thank You for all the love n good times

ALSO SEE: Shemar Moore has a huge net worth. He has a salary of US $175,000 per year. See his fabulous lifestyle

Criminal Mind Actor Shemar Moore is in relationship with Kirsten Vangsness, Is he marrying soon?

What is ethnicity of "Criminal Minds" Shemar Moore? Was he born in America?