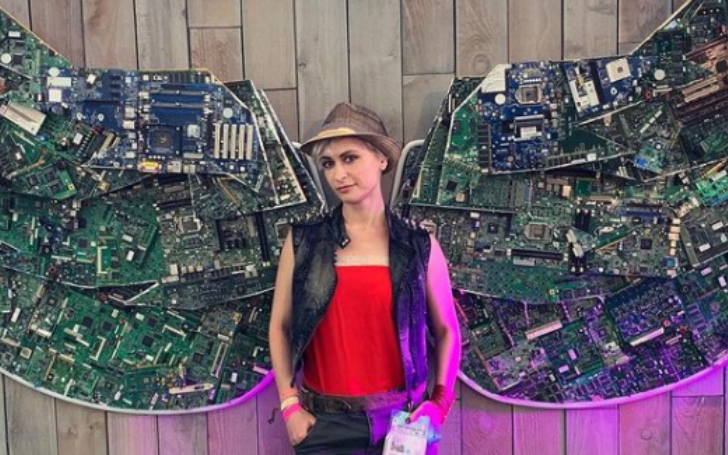 Ukrainian-American cinematographer, Halyna Hutchins, tragically passed away on 21st October 2021 after accidentally getting shot by actor Alec Baldwin on the set of Rust in New Mexico.

As per reports, Baldwin fatally shot the director of photography Hutchins and injured director Joel Souza, 48, on Thursday. Alec revealed that he didn't know the prop gun contained live ammunition.

Who is Halyna Hutchins? Find out about Hutchins' career, family, children, and husband.

Life About Of Halyna Hutchins: Where Was She Born In? Was She Married?

Halyna Hutchins (nee Androsovych) was born in 1979 in Horodets, Ukrainian SSR, Soviet Union. She grew up in a Soviet military base in the Arctic where her father served in the Soviet Navy.

Following her high school graduation, Hutchins enrolled at National Agricultural University and later went to Kyiv National University where she first studied economics and later changed her major to journalism. 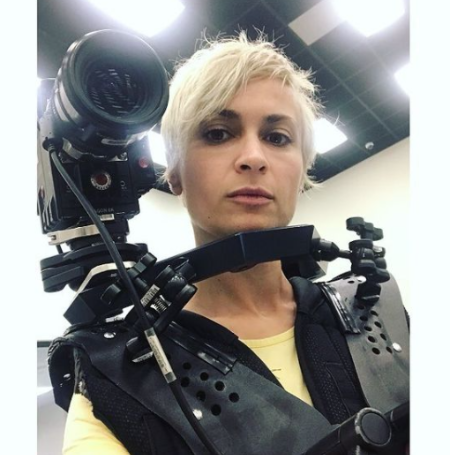 CAPTION: Halyna Hutchins was accidentally shot by Alec Baldwin during the shooting of Rust on 22nd October 2021 SOURCE: Instagram @halynahutchins

After graduation, she worked on documentary films as an investigative journalist in Eastern Europe.

Similarly, in 2013, she joined the American Film Institute Conservatory for a two-year master's program and graduated in 2015.

In 2019, the cinematographer was named one of the "10 up-and-coming directors of photography who are making their mark" by American Cinematographer.

Hutchins was married to Matthew whom she met while attending Kyiv National University. They share a son whose identity is not revealed.

On 22nd October 2021, Halyna was accidentally shot by actor-producer Alec Baldwin during the shooting of an upcoming American Western film Rust.

Baldwin who plays Harland Rust in the movie unintentionally shot and killed cinematographer Halyna Hutchins and injured director Souza after he discharged the prop gun a single time and the bullet flew towards the trio behind the monitor. 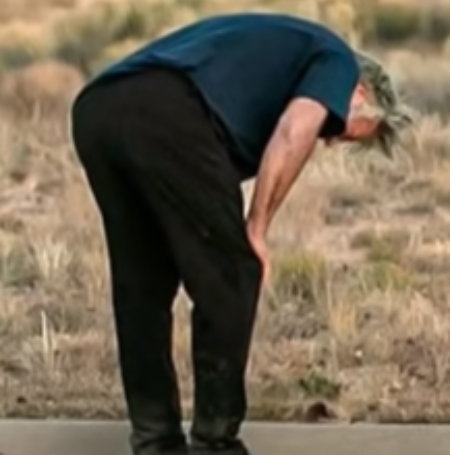 As per reports, Hutchins was shot in the chest and was flown to the University of New Mexico Hospital in Albuquerque by helicopter. She was pronounced dead shortly after. Whereas, Souza was driven by ambulance to CHRISTUS St. Vincent Regional Medical Center in Santa Fe and was released the following day.

Following the incident, Baldwin took to Twitter and expressed his condolence, and said he was fully cooperating with the police.

He tweeted: "There are no words to convey my shock and sadness regarding the tragic accident that took the life of Halyna Hutchins, a wife, mother, and deeply admired colleague of ours, My heart is broken for her husband, their son, and all who knew and loved Halyna."

"I don't think there are words to communicate the situation, I am not going to be able to comment about the facts or the process of what we're going through right now, but I appreciate that everyone has been very sympathetic."

He added: "I think that we will need a little bit of time before we can really encapsulate her life in a way that is easy to communicate,"

A private memorial was held in Santa Fe with Matthew and her 9-year-old son. Alec was also one of the attendants. In a similar way, a public memorial will be held in Albuquerque on Saturday from 6-7:30 pm. 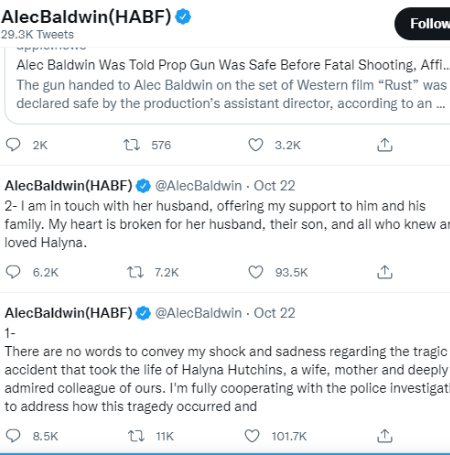 Baldwin shared an article that said the prop gun handed to him was declared "cold gun" which practically means "safe to use". He also claims that the assistant director said he did not know that the gun was pre-loaded with live ammunition.

Moreover, a search warrant released on Friday said that armorer Hannah Gutierrez-Reed laid out three prop guns on a cart outside the filming locations and first assistant director Halls grabbed the gun and brought it inside to Baldwin unaware of it being loaded.