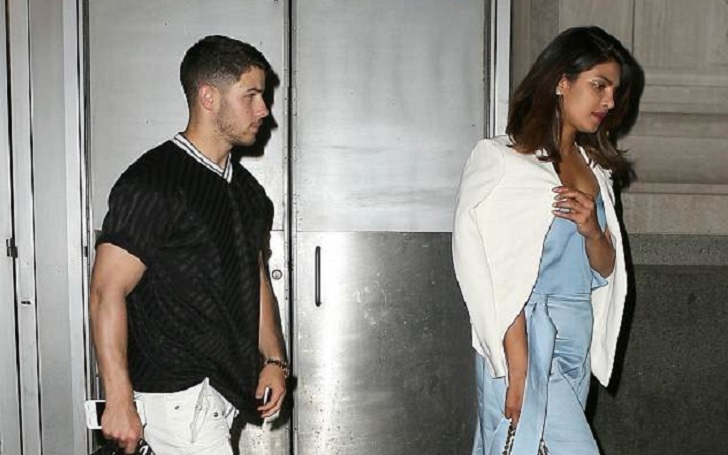 Quantico star, Priyanka Chopra flaunts her cleavage in a blue satin outfit as she joins boyfriend Nick Jonas for a Dinner Date in New York City.

Priyanka Chopra, 35 and Nick Jonas, 25 made it official last weekend by arriving together at Joan’s cousin wedding in Atlantic City, NJ.

The Quantico star and Jonas kept the romance going as they were spotted having late night dinner date at the members-only club Ludlow House on Tuesday in NYC.

Priyanka flaunts her cleavage in baby blue satin couture as the singer rocked in a casual figure in black sports shirt and cargo pants along with black sneakers. While the actress gorgeous gams were covered in the ethereal fabric as she steps forward in designed black heals.

My family is cool.

The Jealous singer and actress first met a year ago but have now become closer. Meanwhile, the couple made it official as Priyanka met the extended singer family at his cousin’s marriage on Saturday. The couple arrived at the ceremony arm in arm and looked awesome pair.

CAPTION: Priyanka flaunts her cleavage in baby blue satin couture as the Jonas rocked in a casual figure in black sports shirt and cargo pants along with black sneakers. SOURCE: Dailymail

After the news of dating, this is their first outing. The pair spends a memorial day and had fun enjoying dinner together.