The TV personality is the one who keeps on entertaining us with their TV shows regarding different topics but they rarely share information regarding their personal life including relationship, dating, and married life. Orly Shani is one among them who hardly disclose about her life.

So if you are also them who are wondering to know about Orly Shani's married life then you have landed to a safe site. Here we have gathered all the information regarding her dating life, married life, and children. So keep scrolling:

Renowned bartender to fashion expert Orly Shani has successfully won the heart of millions of people, but talented TV personality's heart is won by her husband Michael Murphy, a police officer.

On 9th March 2010, the pair tied the knot in a beautiful wedding ceremony. It looks like the couple is living a blissful married life supporting each other. After 5 years of their married life, Shani posted a photo of their wedding ceremony on her Twitter account. Have a look at it yourself: 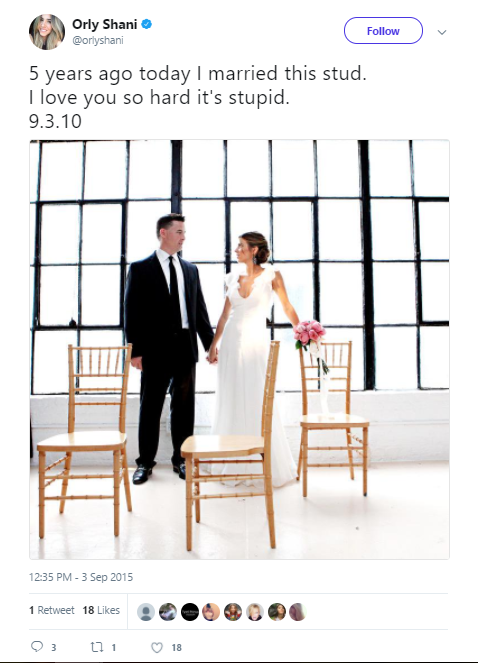 Talking about Shani and Murphy's children, the couple is blessed with two children. The elder child is a boy and the younger is a girl. Both of the kids have acquired grace from their parents. The couple is living together and doing their best to the responsibility being parents.

Previously Shani has shared some views about pregnancy with ilado-paris.com. She disclosed that being pregnant is an interesting side and all the family members also became excited and supportive regarding it. She also said that her husband Murphy took care of her as like of ice-cream crave.

Moreover, Shani also disclosed about the things she disliked during her pregnancy. As she loves to drink wine and wearing tight clothes, its hard for her during pregnancy period.  She said:

I wear tighter clothing while pregnant than I normally do because without something to show off your shape, you can just look like a big ole house!

As Shani is quite active in social media and often shares about every moment of her life, she doesn't miss a chance to share with her children. Let's have a look at some of the pictures she has shared on her Instagram.

As Shani and her husband are in a relationship for a long time they must be sharing a strong bond and seems to be understanding and supportive together. Till date, no any news and rumor regarding their separation is heard which would lead to their separation.