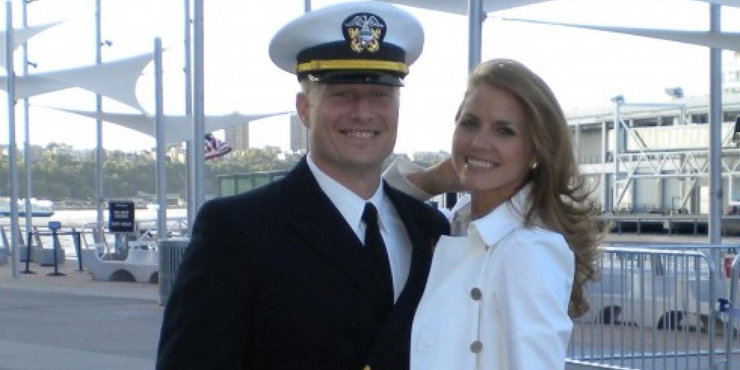 American journalist Jenna Lee, who is a news anchor at the Fox News Channel, apparently makes her husband take care of their child all by himself. In a conversation with some of her close friends, she admitted to letting Leif Babin, her husband; change the baby's diapers and take care of other ordinary baby stuffs as Lief seems to be the more hands-on parent.

Jenna and Babin have been together since 2008. The pair first met at a Navy Seal Warrior Fund dinner, which was held in the Waldorf Astoria in New York. The couple started dating soon after. After three long years in a relationship, they finally decided to marry.

On the 3rd of July, 2011 they tied the knot in Wimberly, Texas. It was a wonderful event full of laughter and happiness. The couple, who shared pink margaritas on their first date, asked for it to be served to their guests during the nuptials. After the wedding Jenna confessed that "At first I was worried I would not be able to keep it together. But once the moment arrived, I didn't shed a single tear!"

"One of the most fun parts of the night was to sit down on the stairs in my dress and watch everyone have such a great time," says Jenna. Furthermore when asked about their wedding, Jenna said, "Walking down the aisle to Leif is a dream come true," Babin added "From the moment I saw Jenna, I knew she was incredibly special."

Following this wonderful event, a new member entered their family. In 2014, their first son, Brian Marc Babin was introduced to the world. The baby was named Marc in the memory of his father's friend who happened to die serving his country.

Talking about Jenna's career, she co-hosts ‘Happening Now’ alongside John Scott. She was previously involved in the Fox's early morning business news program. At just 35 years of age, she still has her whole life to look forward to. A confident and charming personality, Jenna is loved by many people.

Jenna graduated from the University of California. She obtained her master's degree from Columbia University Graduate School of Journalism.

On the other hand, Leif Babin is of a military background. He is also the son of US Congressman Brian Babin. Leif has won a Silver star, Bronze star along with a Purple Heart for his service in Anbar Province, Iraq.

As of now, Jenna Lee earns a salary of 120,000 a year. She also has a net worth of 4 million dollars. She also has about 69.6k followers in the Twitter, although in Instagram, she only has 5k followers.