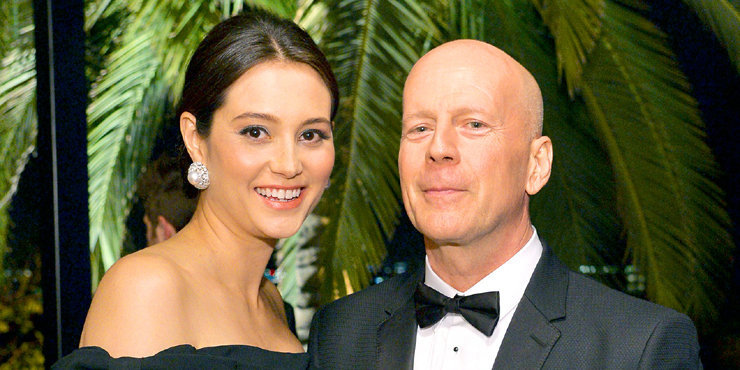 Last time model Emma Heming was seen kissing her husband Bruce Willis was during their sixth wedding anniversary on March. The photograph was posted on her Instagram and Twitter. And now, the Dior model is all over media as she has been seen with her Die Hard husband and two adorable daughters.

The power couple was seen strolling together with their children as they took a trip to farmer’s market last week. Willis proved to be a hands-on dad as he watched over his girls while walking alongside his sexy wife. He seems to be a very responsible parent.

The pair looked like a doting parents as they took their two daughters Evelyn and Mable grocery shopping.

The 60 year old father of her baby girls stuck to the kids as they were accompanied by the children’s granny, Marlene. The old grand-mom watched over the babies as her son and daughter-in-law sampled peaches and nectarines.

While sampling the fruits, the bald star made sure that his daughters were getting some nutritional knowledge as they strolled down the market.

The toddlers enjoyed their day out with their star parents.

Willis wore a Die Hard hat and a shirt that read New York City on the front while the model-turned-actress and the mother of two looked rather cool in a blue and white striped t-shirt along with a pair of loose jeans.

Willis, who is the ex-husband of actress Demi Moore, recently celebrated his 60th birthday by throwing a star-studded party. The birthday bash was attended by his daughters Tallulah and Scout from his previous marriage to Moore as well as musicians Tony Bennett and Keith Richards.

Golden Globe winning husband was also recently seen enjoying a romantic date with wife Emma . The statuesque beauty looked a bit taller than Willis because of the high heels she wore. WIllis looked smitten by his wife who is 5.10ft. while Willis is 6 ft.

The actor sported a pair of flip-flops while Heming was seen in strappy black leather high heels during their dinner outing at Baltaire Restaurant.

Emma looked absolutely stunning in a fashionable black and white jacket with all over circle pattern over a black V-neck. She tucked the top of the black top into her matching black jeans that had tears around the knees.

The model accessorized her look with beautiful dangling white earrings and a silver watch. The 37 year old fashionista who has previously appeared in ad campaigns for Dior Bronze, Escada, Gap, Garnier and John Frieda, opted a very natural look with very little make-up.

Emma and Bruce, who have spent six years together and have two adorable kids together, still seem happily married.