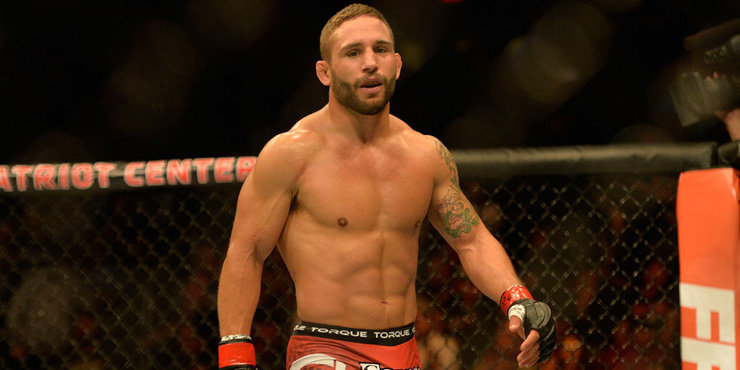 MMA fighter Chad Mendes grabbed the headlines as he lost his UFC featherweight championship to Conor McGregor earlier this month.

Mendes despite losing the game said he does not have any regret over the loss, yes seems he shouldn’t be either, when he has beautiful Abby Raines by his side. Abby, reportedly has been his biggest support and the two are going strong together!!

Currently #3 in the official UFC featherweight rankings, the American wrestler is indeed enjoying his personal life with his gorgeous and lovely girlfriend, Abby Raines.

His girlfriend, Abby Raines graduated from the West Virginia University in 2009. Abby who has keen interest in sports had been college athlete. While she was in the university, she played volleyball and became a member of West Virginia Women’s Volleyball team. As per reports, leggy lass was indeed a gem player.

Abby also attended Washington High in Missouri. Must say, Chad is one lucky guy as she is a kind of the girl who does not let her man down. And there’s no doubt that we will be finding Abby in the front row in his every game. Reportedly, the couple have been together since long and as per sources marriage is definitely in the cards. Oh, really it would be lovely to see this happy couple walking down the aisle soon.

Well, about the UFC featherweight championship, Mendes though unluckily lost the championship, he blasted McGregor with strikes on the feet and bloodied his opponent up with elbows on the ground. It even looked like Mendes was the ultimate winner of the fight before the second round but following his submissive tactics, he had lost to his opponent.

Speaking at the post-fight press conference, Mendes said, "I felt like I was doing great the first two rounds.” He further added, "Especially that second one, I was controlling the fight the whole time. But I took a risk. I went for the submission. I probably should have just stayed there and kept throwing the elbows, but I'm trying to finish the fight. That's the risk you take and that's the fight game."

The UFC featherweight fighter Mendes who is of Italian, Puerto Rican, Irish, Portuguese and Native American descent started his career at young age.

The 5 feet 7 inches tall wrestler started Wrestling since high school and fought for Hanford High School. He was placed 5th as a junior at 112 lbs and 3rd as a senior at 199 lbs in 2003.

After his college, Mendes looked out for opportunities to train with the MMA team, Team Alpha Male and started fighting for Palace Fighting Championship where he was undefeated. He participated in World Extreme Cagefighting and made his debut in 2010 at WEC 47 against Erik Koch and won. He faced several other fighters like Anthony Morrison, Chub Swanson, Javier Vazquez, and his amazing skills made him one of the top wrestlers as he went on carve a niche for himself as a fighter of Mixed Martial Arts.