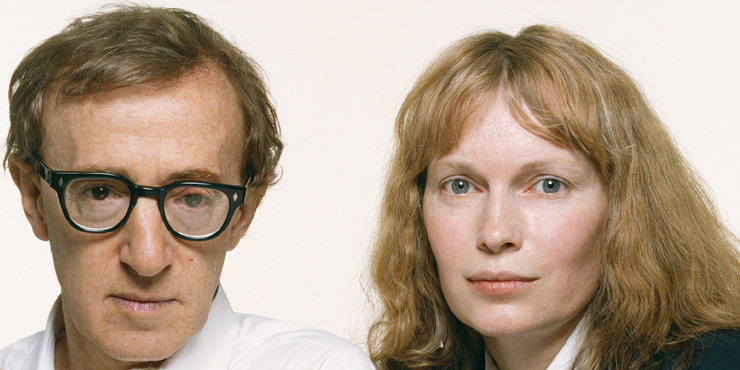 Mia Farrow, one of the most celebrated and successful actress in Hollywood was left devastated when she found out about the alleged affair between her adopted daughter Soon-Yi and her former partner and legendary Hollywood film director, Woody Allen.

Farrow has total nine adopted children and four biological kids including Soon-Yi. In 1991, the actress discovered the secret fling between her then lover and her daughter when she found a few naked pictures of Soon-Yi taken by Woody Allen in his Manhattan apartment.  Farrow had legally adopted Soon-Yi at the age of 8 while she was married to the composer-conductor André Previn. The couple has three sons together.

The incident occurred after only a month of Allen and Mia adopting two children, Moses, 17 and Dylan, 7 then. Allen’s sexual relation with his step daughter was not the only cause of Farrow’s pain and suffering. The actress was left heart broken when Dylan revealed about being sexually molested by her own foster father. Dylan confessed to his mother that Allen stuck his finger in her genitals and kissed her. Though Allen was accused of physical abusing his daughter, the court ruled out the case as inconclusive and the comedian still denies all the allegations. Allen claimed that Mia brainwashed their daughter into believing that she was sexually molested.

“Not that I doubt Dylan hasn't come to believe she's been molested, but if from the age of seven a vulnerable child is taught by a strong mother to hate her father because he is a monster who abused her, is it so inconceivable that after many years of this indoctrination the image of me Mia wanted to establish had taken root?” he wrote on the op-ed section of the New York Times last year.

After the nasty incident and the discovery about his infidelity, Allen was all over the news. Soon-Yi was only 21 and Allen was 56 when the news broke out. So it created an outrage among Farrow and his fans. Farrow was his girlfriend for more than 10 years and appeared as the main character in 12 out of his 13 movies. So, it was obvious for her fans to support her and pour their anger on her boyfriend. Farrow then fought in court for the custody battle with the Cassandra’s Dream director for their biological son Satchel.

Farrow and Allen had started dating in 1980, a year after her divorce with her previous husband, Andre Previn. She was married to singer Frank Sinatra in 1966 but they divorced in 1968. The pair remained friends until Sinatra’s death.

After the nasty break-up, Farrow has not spoken publicly about the scandal. She has alienated herself from Soon-Yi. But her former boyfriend has opened up about his relationship with Soon on several occasions.

The prolific director recently spoke to media about his relationship with his now wife Soon-Yi. They have been together since past 23 years. He is 79 and she is 44. He is 35 years older than her but surprisingly the couple’s relationship has lasted longer than anybody had ever thought it would. They married in December 1997 in Venice, Italy and have two adopted daughters. Woody admitted that he thought their relationship was just a fling in the initial stage but it later turned out to be true love.

His wife Soon-Yi admitted that she never considered her husband as a fatherly figure.

'To think that Woody was in any way a father or stepfather to me is laughable,' she said.

"To think that Woody was in any way a father or stepfather to me is laughable. My parents are Andre Previn and Mia, but obviously they're not even my real parents," Soon-Yi said back then.

And a few sources also maintain that Allen was never Soon-Yi’s father legally as he never married Mia. But despite all the claims there are several who see their relationship as a stepfather romantically involved with his step daughter.

While Soon-Yi claims that she never considered Allen her father, Farrow and Vicky Christina Barcelona’s director’s biological sob, Ronan Farrow(Satchel) once explained to Life Magazine the complicated relationship between him and his adopted siblings and his father.

"He's my father married to my sister. That makes me his son and his brother-in-law. That is such a moral transgression,” he stated.

"I cannot see him. I cannot have a relationship with my father and be morally consistent," he added, "I lived with all these adopted children, so they are my family. To say Soon-Yi was not my sister is an insult to all adopted children."

Woody has earned him fame and riches in Hollywood as one of the most powerful movie makers of the show biz whereas Mia Farrow, who made the Pixie haircut popular, is busy in Humanitarian activities as UNICEF Goodwill Ambassador.

Last month, Farrow was heavily criticized for tweeting the address of t he dentist who infamously killed Cecil the lion in Zimbabwe on her official Twitter account.