Lucy Hale still Dating or Broke up with Anthony Kalabretta? Know her Affairs and Relationship

We all know that Aria Montgomery has a taste for older guys from the famous series ‘Pretty Little Liars.’ But do we know what kind of guys she is into in her real life? Well, we will be talking the detail information about the dating life of Lucy Hale including her current boyfriend.

Lucy Hale is a pretty little girl who won millions of hearts through her perfect body and a cute face. Previously, there were headlines of Lucy Hale dating Anthony Kalabretta. So, is the couple still dating or already broke up? So, after breaking up with Kalabretta, who is Hale dating? Get to know everything here:

Lucy started dating a 28-year-old Canadian Musician Anthony Kalabretta on 30th June 2015. Lucy has always been an open book when it comes to her dating life and shared several photos of her with her boyfriend. Back in 2015, the duo spent a romantic trip to Hawaii. The couple was seen kissing each other in the ocean in Maui. Again back in the year 2015, Lucy gushed about her Anthony in a sweet Instagram photo. The picture was Lucy hugging her boyfriend and both and smiling sweetly at the camera. Lucy captioned the picture ‘My (heart). Also, read: Lucy Hale finds a woman who looks like the perfect mix between herself and Kylie Jenner.

The couple met through mutual friends and started bonding over a lot of things. They loved spending time with each other and loved to listen to music together.

Looking at their relationship, no one would have thought that they would split one day. We feel sad to tell you that Lucy and Anthony are no longer together. After two years of sweet relationship, the couple broke up on 11th May 2017. 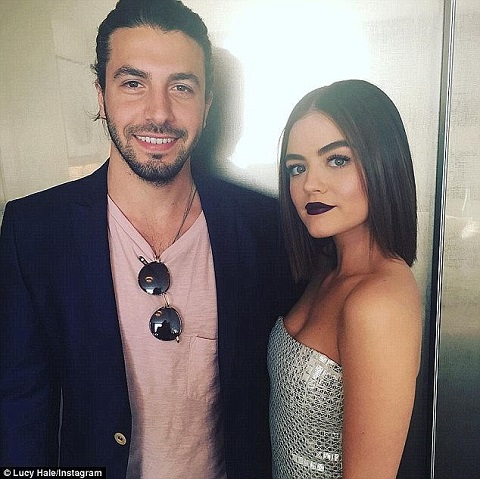 The two have not only split but they have deleted every single picture of them together from the social media. They also removed each other from their social sites. But then again after two months of their breakup, Lucy posted a picture of her with her ex-boyfriend on Instagram. Also, read: After Break up from Anthony Kalabretta, Has American Actress Lucy Hale now Been in a Relationship?

This shows that the couple even though are not together, are in good terms with each other. However, none of them have officially announced that they are back together, so for now, all we can say is they are good friends.