Louise Roe Welcomes Second Child; Who Is The Father Of Her Kid?

So, when was their second kid born? How is her married life with husband going on? Know everything below:

The 39 years old television presenter has given birth to a second child. Their second kid, daughter Ines, was born on Friday, 28th May 2021. She welcomed the daughter with her television producer husband, Mackenzie Hunkin.

The fashion journalist announced the arrival of the baby on Instagram. She uploaded a series of pictures of their new family member with a sweet caption.

Roe wrote: She's here, baby Inès. Thank you to the selfless midwives (especially Lucie) at our hospital, you are all angels.' 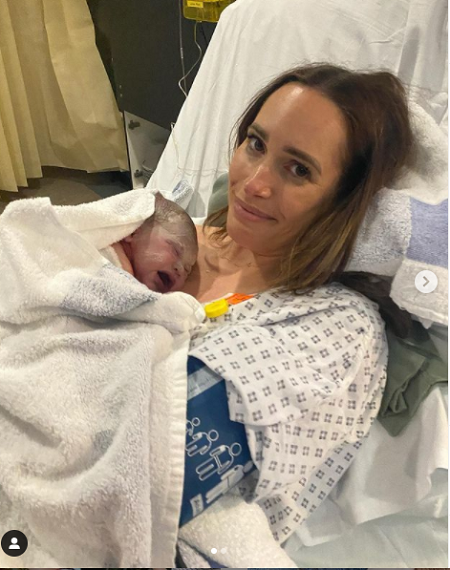 In one of the snaps shared, Roe seems delighted as she cradles her newborn daughter; just moments later, she arrived. In another picture, the television presenter can be seen kissing her husband with their little girl held close to her chest.

Roe, who has been quite positive and open about her pregnancy and labor, has also uploaded an amusing clip of her walking upstairs in a bid to speed up her contractions. She even wore a sporting dark shade, as she revealed that the bright lights could slow them down.

Roe and her husband, Hunkin, back in February, announced that they were expecting a baby girl in a sweet gender reveal video. They took Instagram to announce the happy news. She announced her second pregnancy on Instagram in January, where she uploaded a photo of Honor hugging and kissing her bump.

Roe and Hunkin moved back to the UK last year after living and working in California for eleven years.

Roe has not openly talked much about her personal life. It is not clear when and how Roe and her husband started dating or how they fell for each other.

But, their relationship came into the spotlight when they tied the knot on 1st October 2016, in a wedding ceremony held at Eton College Chapel, England. They exchanged the wedding vows in an intimate wedding ceremony, all surrounded by family and friends.

Before welcoming Ines, the couple is already parents to a kid. On 11th January 2018, the duo welcomed their first kid, daughter Honor Florence Crosby Hunkin.

As of now, the pair enjoys almost five years long conjugal life without any divorce or separation issues.