English singer-songwriter Leigh-Anne Pinnock, who is widely known for being a member of the British girl group Little Mix, is pregnant. The 29 years old singer is currently expecting her first child with fiancé Andre Gray.

So, when is the due date of Pinnock? When did the pair get engaged? Are they planning to get married anytime soon? Know everything below:

Little Mix’s star Pinnock is currently expecting her first kid with fiancé Andre Gray. The 29 years old singer took her Instagram to announce the happy news. The news of pregnancy comes after they announced their engagement back in May.

Pinnock posted a trio of pictures on her Instagram to announce the happy news. She wrote: We've dreamed about this moment for so long and we can't believe the dream is finally coming true... we can't wait to meet you.' 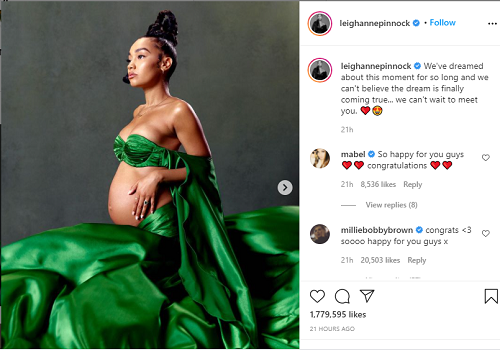 For the photoshoot, the singer wore a bra with billowing green sleeves and a skirt of matching silk material, whereas the soon-to-be father posed shirtless.

Pinnock’s make-up artist Hila, hairstylist Dionne Smith, and stylists Zack Tate and Jamie McFarland helped her to make sure that the photoshoot turned out perfectly. She even shared the behind-the-scenes video of the shoot.

Her bandmates Jade Thirlwall and Perrie Edwards were quick to congratulate her.

The news of her pregnancy comes to a couple of days after she was seen wearing a series of baggy ensembles. She was last seen on 30th April in London, where she wore a baggy khaki green outfit that completely hid her stomach.

Leigh-Anne Pinnock and Andre Gray Are Engaged! Are They Getting Married?

After being in an on-and-off relationship with footballer Jordan Kiffin for around three years, in 2016, Pinnock confirmed that she has started dating Andre Gray. After dating for four years, the duo got engaged on 28th May 2020, on their four-year anniversary.

Andre popped out the question at their home during the lockdown. For the special moment, the professional footballer set up candles like something out of the movie.

Opening up about their special moment on Bumble’s My Love Is… podcast back in November, Pinnock revealed that they were actually watching a movie at the time. She said:

Then it cut out, and there was pictures of us, it was playing our song, then the screen changed to 'Will you marry me?' and he was on one knee.

Andre was planning to propose to her for quite some time ahead, but he had to struggle after the UK’s first lockdown was put in March. The football player claimed that his sister helped him to pull off the proposal to make it as romantic as possible.

Pinnock could not wait longer to share the happy news with her fans and followers on Instagram. She flaunted her diamond engagement ring shortly after accepting the proposal.

Well, for now, it is not clear when the duo is getting married.