Home Gossip Larry the Cable Guy's wife Cara Whitney:Know Everything about her Married Life and Children

Larry the Cable Guy's wife Cara Whitney:Know Everything about her Married Life and Children 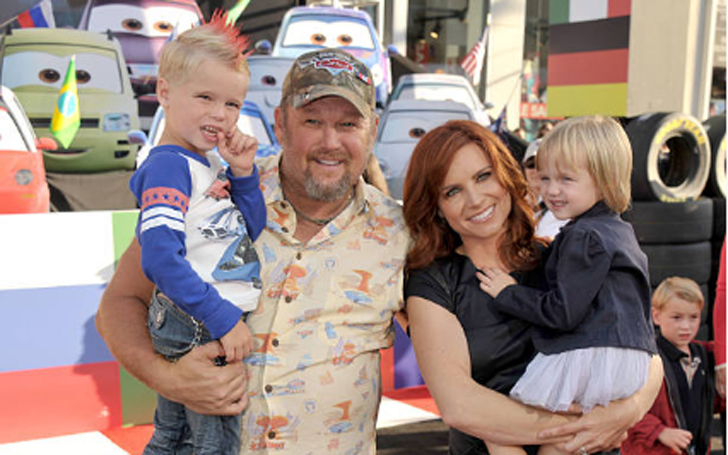 Cara Whitney is the wife of a popular American comedian, actor and vocal artist Daniel Lawrence Whitney who is widely known by the stage name Larry the Cable Guy. The couple together has two children.

Cara Whitney is happily married to Larry the Cable Guy

Cara Whitney and Larry the Cable Guy met each other for the first time in 2004 in Los Angeles when Larry was struggling for establishing his career. And soon after their first encounter, the couple were attracted towards each other and formally started dating. 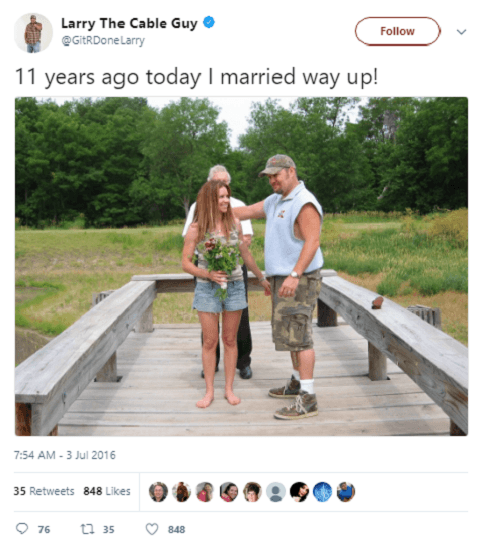 [ CAPTION: Cara Whitney and Larry the Cable Guy on their wedding ][ SOURCE: Twitter ]

After dating for a couple of years, the couple decided to take their relationship to the next level and finally shared their vows on July 3, 2005.

Their wedding took place on a field in Nebraska but the wedding was not traditional as both bride and groom were wearing casual dress. 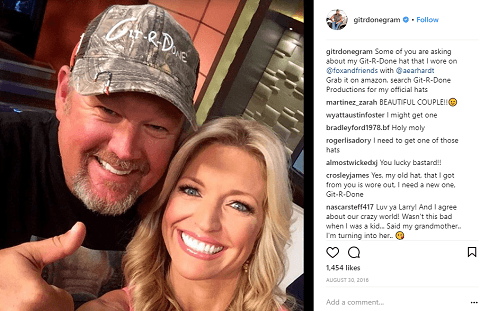 In an interview, Larry talked about their marriage and said,

Our whole wedding cost 180 bucks. Afterward, we re-heated lasagna for everyone and set off fireworks. [Cara]’s a bonafide, grade-A cowgirl. And she’s funnier than I am!

He further added, they started talking when Whitney expressed her love for him by telling how much she loved the smell of the cattle truck. Well, Larry laughed and said, "You've got to be kidding me!" and told that, he too liked Whitney.

The couple has already celebrated their twelveth marriage anniversary and is still living happily with each other. Furthermore, they haven't faced any rumors of divorce yet. 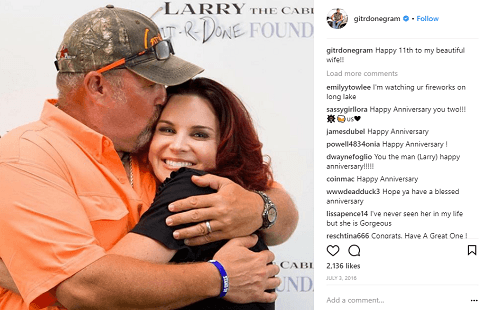 Moreover, the couple together has founded a charity named Git-R-Done Foundation to help children suffering from hips dysplasia.

The couple was happily enjoying their married life. Their happiness increased even more after the couple welcomed their first child a son Wyatt Whitney on August 2, 2006, just after a year of their marriage.

But soon after the birth, their son was diagnosed with a hip dysplasia. So, as per the advice of Dr. Chad Price, the couple decided to get their child a surgery. Wyatt was fitted with a harness for around 8 months and was finally cured. 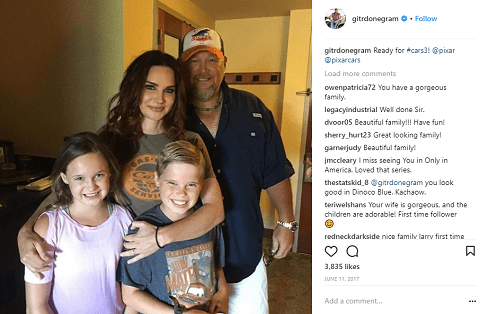 Furthermore, after a year of their son's birth, Whitney and Larry welcomed their second child a daughter Regan Whitney on October 29, 2007. According to Whitney and Larry, they named their daughter after the name of former president Ronald Regan.