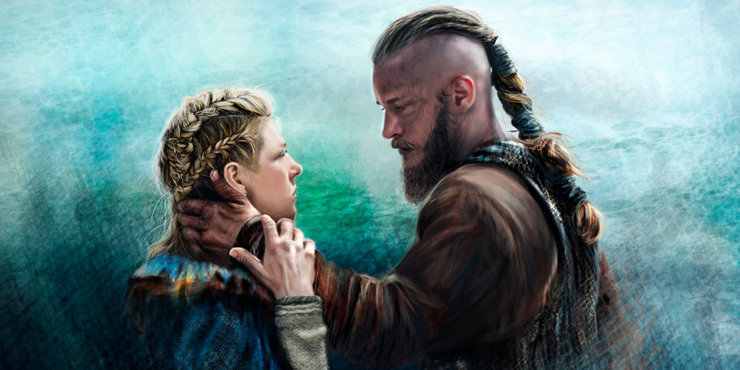 Shield maiden Lagertha will be taking the center stage on the new season of Vikings for formerly being married to Ragnar.

Lagertha, who is played by Katheryn Winnick, is the wife of legendary Viking Ragnar Lothbrok and a shield maiden. But now that she has separated from Ragnar, she is at the height of power. She has risen to the power as Earl of Hedeby in her own right and is known as Earl Ingstad. This is the reason why Lagertha is all set to become the center of History Channel’s Vikings’ upcoming fourth season.

This is probably good news for the lovers of Vikings as they will get to see their favorite character, Lagertha, bolder than ever and sexier than the previous three seasons of the popular show.

History’s Vikings is all set to return to the television screens this coming Thursday and the makers of the show have dropped a new teaser. And guess what! This most recent teaser sees Winnick’s tattooed character Lagertha on the front and center, all thanks to her unsuccessful marriage with none other than the hero of the show, Viking Ragnar.

Though the relationship between the former couple did not last long, this has certainly helped Lagertha become one of the most important characters in the show. And the teaser has made all of us feel curious and excited for the new season. The fourth season is sure to be centered on Lagertha’s notoriety and more of the new things that will be happening in the Vikings’ universe.

And to increase the level of excitement in all of you, we have something interesting. After reading this, we are one hundred percent sure that it will make you jump with giddiness. We have brought you all the details about the premiere episode, “A Good Treason.”

“In the Season 4 premiere, a dangerously ill Ragnar returns to Kattegat, where his suspected death kicks off a scramble to succeed him. Meanwhile, Lagertha engages in a power struggle with her calculating, former second in command, Kalf; Rollo betrays his heritage and remains in Frankia; and Floki pays the price for his brutality against the Christian priest,” wrote the TV Guide.

The upcoming season is sure to be different than any of the previous seasons in the series. There are several things that will surely change in Vikings and the new teaser promises it. We don’t know what else we will be seeing this season, but it is surely going to be fun filled and full of thrill and adventure.
The first ten episodes of the show will be aired this winter and spring, and the second half will air, most probably, in the fall.

We know, you can’t wait any more to see the Canadian actress Winnick as Lagertha this year.
Winnick has previously appeared in several other TV shows such as Amusement, Bones and A Glimpse Inside the Mind of Charles Swan III.

The blonde hair beauty was rumored to be dating Sofia Vergara's Ex Nick Loeb, but her rep denied the rumors. She has an estimated net worth of $1 million dollars.