Home Gossip Joshua Bassett Reveals Being Part Of The LGBTQ Community: Is He Dating Someone?

Joshua Bassett Reveals Being Part Of The LGBTQ Community: Is He Dating Someone? 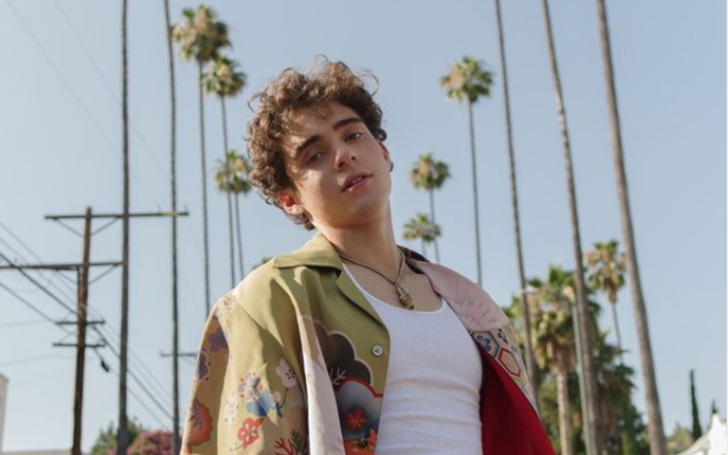 The 20-year-old actor and singer Joshua T. Bassett has been the center of attention for a while now. From his on-screen romance in the High School Musical series to off-screen dating rumors with actress-singer Olivia Rodrigo, Bassett has kept his fan following curious about his love life.

Talking about curiosity, he made a "coming out" video with Clevver News a month ago leaving the public including his fans in shock. Find out more about his relationship status with us.

Joshua Bassett Came Out As A Part Of LGBTQ Community

On 10th May 2021, Bassett teamed up with Clevver News on YouTube for a Q&A video where he mentioned "This is also my coming out video I guess."

In a similar way, in an interview with GQ, he opened about his sexuality and said: "I am anti-coming out in the sense but there's no need to, People are welcome to have boxes if they want them." 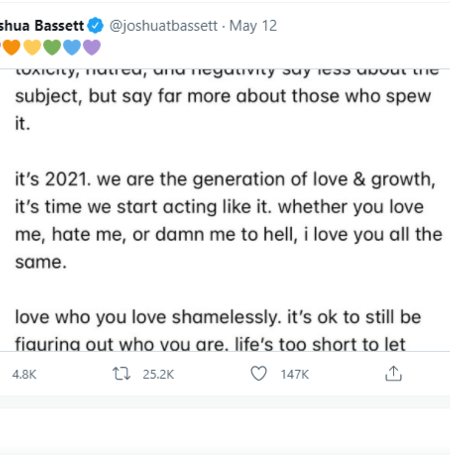 He also stated: "Sometimes your letter changes, sometimes you try a different one, other times you realize you’re not what you thought you were, or maybe you always knew,"

Basset added. "All of these can be true. I'm happy to be a part of the LGBTQ+ community because they embrace all."

Following the interview, he took to Instagram and encouraged people to love who they love and assured those still figuring their sexuality out.

Is The Rising Star Dating Anyone?

The Lie Lie Lie singer left both fans and the public in shock when he came out as a part of the LGBTQ community. However, the actor has not mentioned a word regarding his relationship status.

Although he has been linked with few prominent faces of the industry. Bassett keeps his private life away from the limelight and prefers a low-key lifestyle when off-camera.

In a recent interview, he compliments Grammy-Award winner singer Harry Styles and says: "He's just cool. Like, he's cool. Who doesn't think Harry Styles is cool?" he continued. "Also, he's hot. I guess this is also my coming-out video."

Bassett and Rodrigo first sparked dating rumors due to their outstanding on-screen romance on the Disney+ High School Musical: The Musical: The Series. The rumor was backed up by their posts on their social media profiles which were later deleted in June 2020.

After Olivia Rodrigo's debut single "Driver's License" was released in January 2021, fans quickly speculated that the song was about their split. 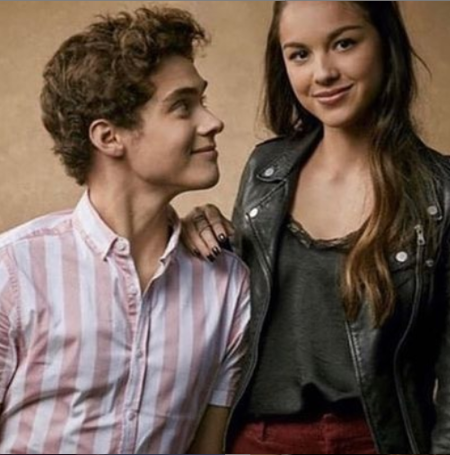 Some lines from the song like "You're probably with that blonde girl who always made me doubt/ She's so much older than me / She's everything I'm insecure about" giving clear hints that the song was pointed towards Bassett and fellow Disney star Sabrina Carpenter.

While the debate about who the songs were for going on, Carpenter's single "Skin" was dropped like a bomb on 22nd January adding more fuel to the rumors.

According to various sources, Rodrigo and Bassett reportedly dated and split in the first half of 2020. Some sources even claim that the 20-year-old actor left Rodrigo for Girls Meets World star Sabrina.

Though it was never confirmed by both parties, fans are convinced that the dating rumors, split, and the songs were about each other.