Jodie Turner-Smith is a famous American model and actress who started her professional career in 2013. Within a very short period of time, the actress won the hearts of many from her incredible acting skills in The Last Ship, Nightflyers, and Queen & Slim.

Well, Jodie openly discusses her professional career and loves to update her fans about it. Is it the same with her personal life? How is her married life going on?

The 34 years old model is a married woman. She is married to Joshua Jackson, a Canadian-American actor.

To start from the beginning, according to US Weekly, Jodie and Joshua first met at Usher’s 40th birthday party. It won’t be wrong to say that they fell in love at first sight.

Some sources even claimed that the couple started dating right after they met. However, their romance rumors got confirmed when they were captured having lunch in Los Angeles in November 2018. During the time, they were seen holding hands and spending cozy moments together.

Opening up about their marriage license, the model said:

I haven’t said to anybody, ‘Yeah, we got married,’ People are assuming whatever they want, but when people tell me ‘Congratulations,’ I say ‘Thank you.’

In November 2019, the couple went red carpet officially while promoting Queen & Slim. During the time, Jodie flaunted a sparkly rock on her ring finger, making everyone suspicious that they took their relationship to the next level.

In December 2019, US Weekly reported that they got married in a super-secretive wedding ceremony. At the time, the couple also confirmed that they were expecting a child together, their first kid.

In early 2020, during an interview with Sunday Times, Jodie admitted that she is obsessed with her partner.

On 14th February 2020, Jodie celebrated Valentines’ Day, flaunting her baby bump. In the caption, she expressed love for the baby daddy.

In March 2020, the couple confirmed the sex of their first kid. They revealed that they were having a baby girl. 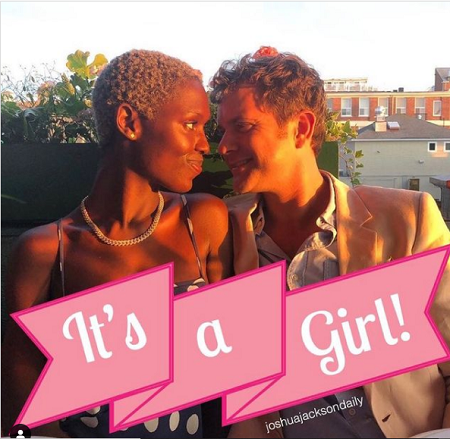 CAPTION: Jodie Turner-Smith and Joshua announced that they were having a baby girl SOURCE: Instagram @joshuajacksondaily

On 21st April 2020, news tabloids confirmed that Jodie gave birth to their first child. It was then reported that both mother and baby are happy and healthy.

As of now, the pair enjoys over a year-long marital life. The family of three maintains a healthy familial relationship.