Home Gossip Is Jaden Smith dead?Find out his Affairs with Sarah Snyder

Is Jaden Smith dead?Find out his Affairs with Sarah Snyder

If you have watched the movies like The Karate Kid, The Pursuit of Happyness, After Earth, then you might be very familiar with the name Jaden Smith. Jaden Smith is the American rapper and actor. He is also the son of American rapper, songwriter, actor and producer Will Smith.

We see many people stalking their favorite celebrities' children. Same is with Jaden Smith. Since he is the son of a celebrity and also he himself is a celebrity, there is obvious that people will stalk him. There were rumors that Jaden Smith is dead. Check more to know the detail information about it…

What will be your reaction when you hear that your favorite celebrity is dead? We guess this might be the most heartbreaking for everyone. This happened with the fans of Jaden Smith. Jaden was once rumored to be death. There were rumors of Jaden Smith committing suicide and ending up his life.

It was September 11, 2016, when the news of Jaden Smith death took over the internet. Their fans were heartbroken and we can see his fans sharing their feelings after the news of death got viral. Have a look at some of those tweets….

was it true that jaden smith committed suicide??????? O.O

WHAAAAAT JADEN SMITH COMMITTED SUICIDE?!????!!!? CAN SOMEONE CONFIRM THIS!

Don't worry!! Jaden Smith is not dead and still alive. It was the hoax that took over the internet. Jaden was spotted with Sarah Snyder just before four days of his death rumors took place on the internet. They were walking around NYC in the evening. Have a look at the pic… 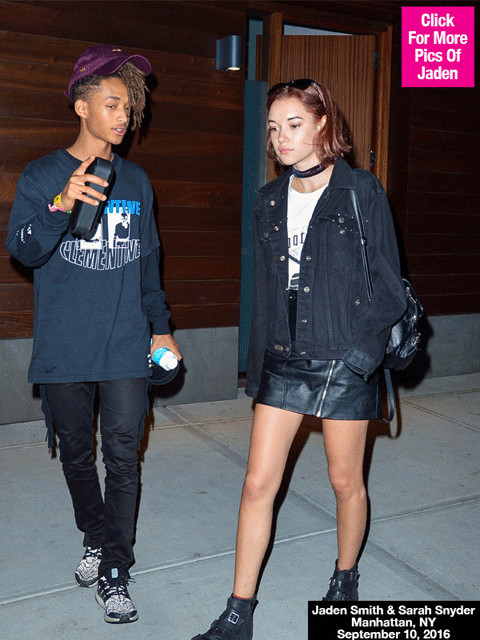 Jaden Smith was once spotted dating American model Sarah Snyder. Sarah is actually three years older than Jaden. The couple started dating since August 2015. They dated for around a year and got separated in September 2016.

While asking about the reason behind their breakup, there was news that Sarah cheated on her boyfriend Jaden with Gunner Stahl who is a photographer by a profession. The couple was taken to be the cutest and lovable couple in the town.

It's really frustrating when people spread the unwanted rumors of the celebrity you like. Don't worry people it was just a hoax. Miley Cyrus and Sylvester Stallone are also the victims who got involved in the death hoax.