Home Gossip Greg Kinnear and his wife, Helen getting a divorce?

Greg Kinnear and his wife, Helen getting a divorce? 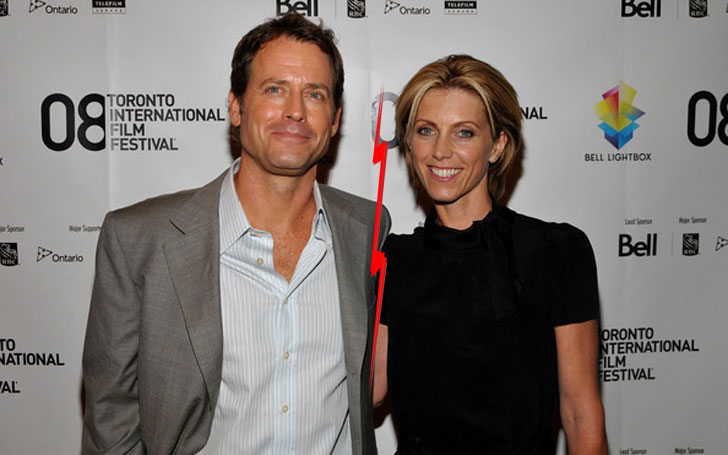 Greg Kinnear is an American actor who is widely famous for playing an Academy Award nominated role Simon Bishop in the film As Good as It Gets. Along with his appearance in other notable films and TV shows like Sabrina, Green Zone, Sunshine, Modern Family, House of Cards, The Kennedys, and Confirmation, the actor is also contributing as a producer and television personality to the industry.

Longansport-born actor has tied a knot with Helen Labdon. In today's article let's reveal if his marriage with a retired British glamour model life partner is really coming to an end? Continue reading the page to learn if their divorce rumors are true.

Is Greg Kinnear Getting Divorce With Helen Labdon? Do They Have Kids?

Invincible actor is currently married and father of three kids. He exchanged wedding vows with Helen Labdon on May 1, 1999. His wife is a former British glamour model.

As per sources, Kinnear and his wife met in the year 1994. At the time of their first meeting, the former British glamour model was serving as an assistant on a movie where the actor was one of the cast members.

Talking about, the couple's children, they first had a baby in the year 2001. However, the baby was unfortunately still born. As of now, the couple togethers shares three kids.

The duo's elder daughter, Lily Katherine Kinnear welcomed in 2003. Again, Greg and Helen had another baby girl, Aubrey Mar Kinnear in 2006. Finally, their family completed after their younger daughter, Kate Grace Kinnear was born in 2009.

There is rumors, of Kinner and Labdon are getting divorce. However, on the onging fake news the actor himself told the parade magazine in 1996 that

"With Helen, it's very serious, one of the great loves. My parents have been married for 40 years, and, from what I've seen just living out here, the idea of divorce scares me. I want to have a marriage and kids, but I've got to do it right the first time."

He is still in love and in marriage with Helen, they’ve got kids too. He is living by every words he has spoken when it comes to his marriage and family. The family of five are leading a blissful life and live a lavish lifestyle in the United States of America.

As per reports, the "In with the Devil" alum owns a mansion in Los Angeles, California which he paid $3.6 million in the year 2001. Two years ago, he listed his meat loaf's former Mandeville Canyon Crib house located in Brentwood asking $6.595 million. The residence built on 5,083 square feet features 5 bedrooms and 5 and 5.5 bathrooms.

What Is Greg Kinnear Net Worth?

His parents are Suzanne Kinnear (a homemaker) and Edward Kinnear (career diplomat who served for the US State Department). He has two siblings, brothers named James Kinnear and Steven Kinnear.

As per sources, he was raised a "Foreign Service brat", often moving from Beirut to Athens. Moving towards his education, he attended American Community School Beirut, ACS Athens, and The University of Arizona.

Having started his journey with his debut in the TV show ‘E!’s talk soup’,  actor Greg Kinnear has established his name in Hollywood  with more than a dozen nominations including his Oscars nomination for ‘ As Good as it Gets’ and more than half a dozen wins from the nominations.

Some of his notable acting credits include Sabrina, You've Got Mail, Nurse Betty, We Were Soldiers, Robots, Heaven Is for Real, Misbehaviour, Friends, Talk Soup, Mordern Family, House of Cards, and Confirmation.

Active in the industry since 1988, he has a total of 78 credits under his name. According to Celebrity Net Worth, Greg Kinnear is worth $20 million, whereas, he earns a salary of $125,000 per episode.