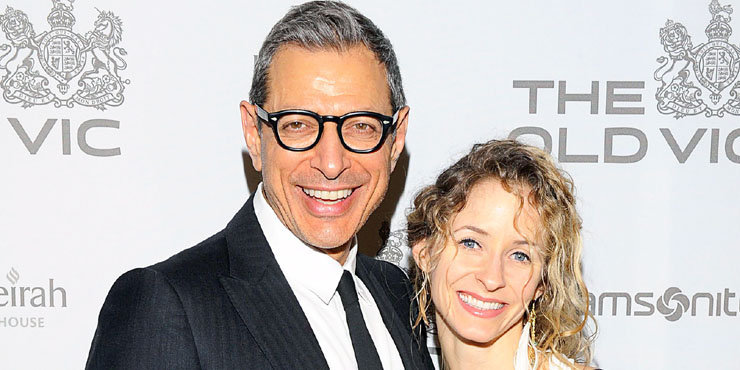 It’s joys all around for Jeff Goldblum. The Jurassic Park star recently became a dad as his wife, Emilie Livingston, gave birth to a baby boy on July 4th. The couple was ecstatic to share the news as Goldblum wrote on his Facebook account,

"We’re so excited to share the wonderful news of the birth of our son, Charlie Ocean Goldblum, born on the 4th of July. Independence Day,"

Coincidentally, Goldblum, who starred in the famous, successful 1996 film Independence Day was shooting for “Independence Day: Resurgence” as the baby was born.

Her wife was also quick to post on Twitter about the baby. Emilie, who is 30 years younger than Goldblum, was also seen sharing the news on the photo-posting site Instagram.

Emily is a former Olympian who is now working as a contortionist. She came to limelight after it was confirmed that the two were getting married in November 2014. Insiders report that Goldblum popped the question while they were enjoying their trip in Hawaii. Emily was quick to accept his proposal and announced the news that she was pregnant the day before the wedding. The two had apparently dated for two years before deciding to tie the knot.

Although famous as the wife of Jeff Goldblum, Livingston has had her shares of success as she has made a name for herself as a gymnast. Emilie was a rhythmic gymnast for Team Canada in the 2000 Olympics in Sydney and was placed 17th in the All Around competition. Since then, she has become a professional aerialist -- performing with huge stars like Justin Bieber, Jennifer Lopez and Trey Songz.

Livingston began ballet and dance at the age of 2, and at 6, she began training in artistic gymnastics and ballet. By 10 years old, Livingston was chasing her Olympic dream as she moved to Russia to train with renowned rhythmic gymnastics coaches. Livingston has been a three-time national champion of Canada and qualified for the 2000 Sydney Olympic Games.

The low-key actress, who is now 32, seems to be enjoying her life. Although married to a guy much older than her, Emily says that she is happy to be have the Jurassic World superstar as her husband. They say love seeks no religion and love seeks no time and well, looking at this couple, love certainly doesn’t see age as well.