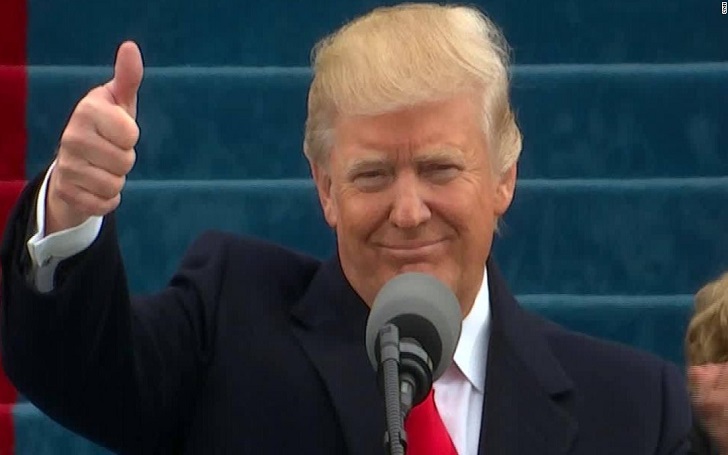 It seems like Donald Trump enjoys making headlines. Sometimes for banning Muslims, sometimes tweeting about celebrities and their love life but this time he has done something surprisingly good deeds.

Donald Trump decided to step in and put a halt on passing the law that allowed brutal hunters to murder elephants and bring back their parts as memoirs back into the country. The irony although is, the decision was made by his administration. For more information keep scrolling.

Donald Trump does not need to sweat for getting into controversies and probably he takes comforts in that. He might be the first U.S president that has made these many headlines because of his twitter rants.

SEE: How Tall is Hillary Clinton and Donald Trump? Does height matter in US Election?

On Nov 14 the U.S Fish and Wildlife Service did announce that the law permitting to bring back so-called hunted elephant trophies to the United States from Zimbabwe and Zambia was finalized. As they found a research which read, that the killing of African elephant trophy animals in Zimbabwe, on or after January 21, 2016, and on or before December 31, 2018, will enhance the survival of the African elephant.

It was more than good news for groups like National Rifle Association and the Safari Club International Foundation. Why would not they? 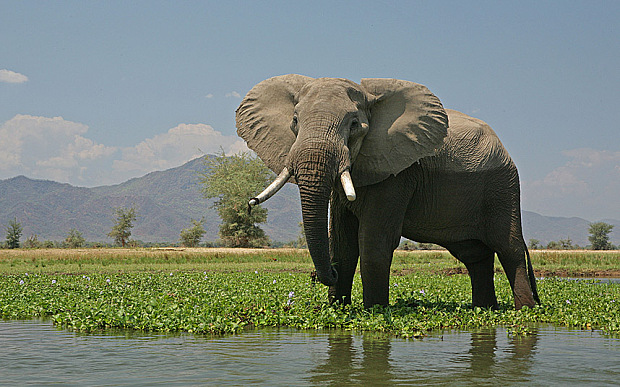 If the saying is true then why is African elephants are listed under the US Endangered Species. According to WWF, their population had decreased by more than 110,000 in the last decade, mostly because of poaching.

The topic has always been disputed and while it sounds logical on papers but impractical. Obama administration had first imposed the law back in 2014, banning the hunters to bring their trophies with them back to America from Zimbabwe and Zambia but the hunters were allowed to bring such trophies from South Africa and Namibia. 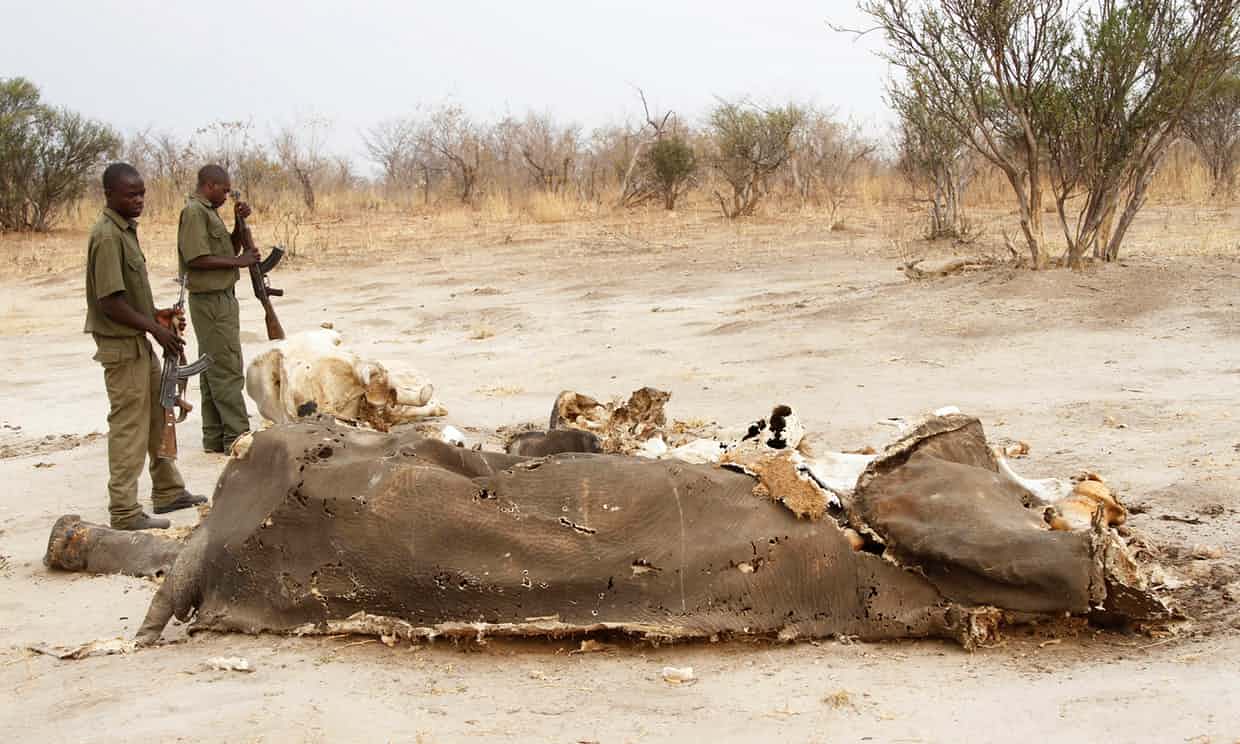 Hours later following the announcement, Ryan Zinke Interior Secretary of Donald Trump released a statement on Friday. He said that the discussion with the president reached a mutual decision, both believe that conservation and healthy herds are critical.

Donald further tweeted, ‘until such time as I review all conservation facts.’ 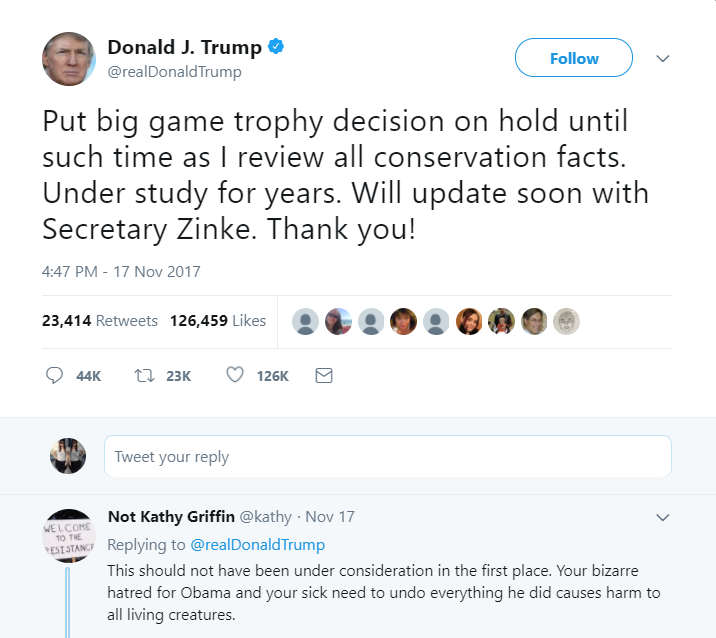 Trump although has been seen less in public but he has made sure that he does not miss Twitter. Seems like he's very fond of Twitter than being interested in the welfare of fellow Americans.

Donald Trump Says He is Not a Fan of Hunting

Nevertheless, his decision came quite unexpected and shocking considering his sons are a fan of hunting. Back in 2011, pictures of Donald Trump Jr. holding the tail of a dead elephant had spread widely on the internet and was later arrested for investigation. 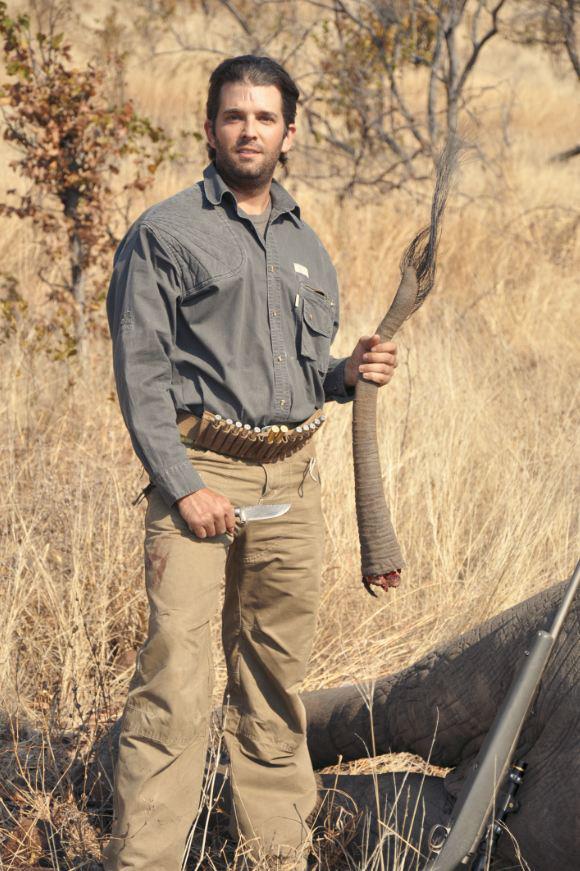 If you did not know, Donald Trump Jr. further told in March in an interview that sport was a great way to see the world while in September he even ditched Secret Service in order to go hunting in Canada.

Most of all, his picture created the biggest controversies and rage among animal rights groups. So what did Donald Trump Sr. have to say about his sons? He replied or to be exact, tweeted, 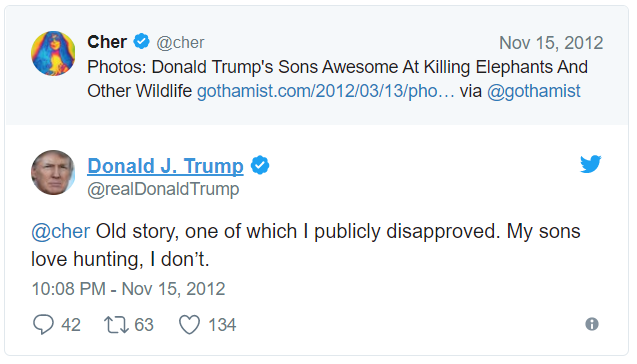 Nevertheless, with his decision on holding the ban lift, he might have earned himself few more supporters in that case. Two days ago, he even told via Twitter that it will be very hard to assure Trump that this horror show will help in conservation of elephants.

Donald Trump might finally have come to his senses because on the basis of his earlier actions, it felt like Donald never cared for his supporters. But let's not judge him too soon because the final decision is yet to be made.

So, what will be Donald Trump's final decision? He told it will take a week time. Let's hope this time he makes a wise and rational decision.