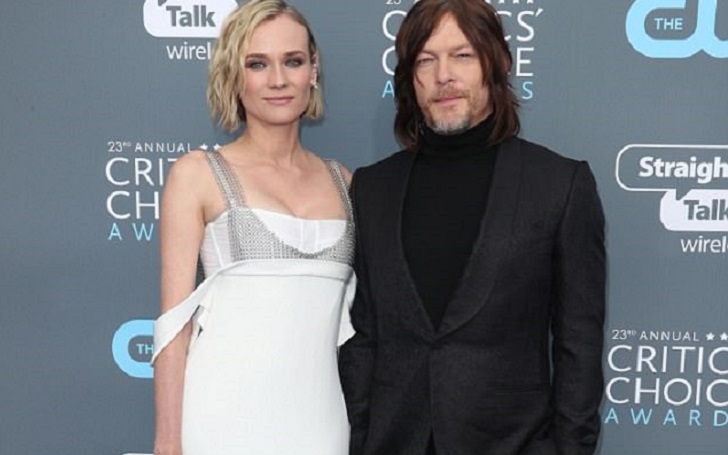 Diane Kruger, 41, is pregnant, she is expecting her first baby with boyfriend Norman Reedus.

Party of 3! Diane Kruger is reportedly to be a mother.

The 41 years old Germany actress better known for her role in the historical film Troy alongside Brad Pitt is pregnant and expecting her first baby with actor Norman Reedus who is said to be taking lead role replacing Lincoln in The Walking Dead series.

The pregnancy news was confirmed by US Weekly after Page Six claimed a few days ago the beautiful star looked to be pregnant the way she hid her bump with an oversized gown at the Cannes Film Festival.

Dear @prada, you made me feel like a princess and that build in bra made my boobs feel like the were defying gravity  #winning @chopard @micaelaerlanger @perrinerougemonthair @sandrinecanobock

The Inglorious Basterds star on May 24 drop a hind for her IG followers when she took her Instagram to share a black and white pic of herself and captioned a baby footprint emoji.

Reedus also has a son Mingus Lucien Reedus, 18, from his ex-Helena Christensen whom he dated from 1998 to 2003. But they never got married.

Reedus and Diane met on film Sky which was released in 2015 and they were spotted kissing after two years. Before dating Reedus, she was in the relationship with Joshua Jackson from 2006 to 2016. From 2001 to 2006 she was married to Frensch actor Guillaume Canet who is now married to Marion Cotillard and they are parents of 2 children, Louise and Marcel.