Courtney Stodden Is Engaged! Who Is Her Fiance? Her Previous Marriage?

So, who is her new partner? When did the duo exchange rings? What was the reason behind her divorce from her ex-husband? Know everything:

The 26 years old singer is officially off the market. Stodden is now engaged to partner Chris Sheng after her controversial divorce from former husband, Doug Hutchinson.

On 30th May 2021, the Celebrity Big Brother alum announced the happy news on Instagram. She announced engagement flaunting her giant halo-style cushion cut diamond engagement ring in A Boomerang video. 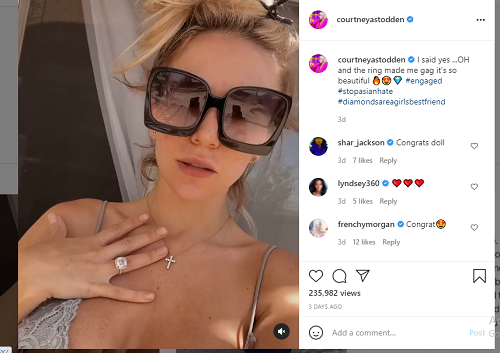 As per sources, her partner popped the question in their dimly-lit dinner. Sharing the Boomerang video, she wrote: I said yes… OH and the ring made me gag it’s so beautiful.

On the other side, her partner also announced the happy news on Instagram. The 41 years old film producer admitted that he feels blessed and fortunate. The pair took their relationship to the next level after dating for almost three years.

Her Past Relationships; Marriage And Divorce!

Stodden grabbed huge attention after tying the knot with actor Doug Hutchinson. She was sixteen years old when she signed up on the Internet for an acting workshop taught by her ex-husband. Even before meeting in person, they fell in love with each other.

As Stodden was minor, Hutchinson said that he would cease his relationship with her if their parents disapproved. She was sixteen years old when Hutchinson was 50 years old. They got married on 20th May 2011, in Las Vegas, Nevada. She was his third wife.

During interviews, Stodden admitted that their 34 years age gap was the primary reason behind their divorce. However, later in 2014, they reconciled and planned to renew their wedding vows.

On 17th May 2016, the ex-couple announced that they were expecting their first child. Sadly, they suffered a miscarriage.

In early 2017, it was revealed that Stodden and Hutchinson had separated but were living together. In March 2018, the singer filed for divorce. Their divorce was finalized in March 2020.