Russell Peters is a Canadian comedian of Indian descent. He started his career as a DJ but the way he steeped higher in the ladder of success is amazing. He began to give priority to comedy after George Carlin, one of the top comedians, praised him.

Well, I know you guys are not here to know about his career. Russell Peters seems off the market as his engagement news is going viral. Let’s gossip about his personal life now.

But that didn’t work out. Later Sunny said that dating Russell Peters was a mistake.

Russell Peters married his longtime girlfriend Monica Diaz. The couple exchanged the wedding rings on 20th August 2010. It was like Russell finally got the love of his life but that turned out to be untrue as the couple began to split and finally divorced in 2012.

Russell Peters with his ex-wife, Moniac Diaz, and daughter

Russell Peters said that there were no hard feelings while the couple got divorced. The comedian clearly addressed that they didn’t know each other completely and realized it would not be for a long run. So he wanted to get divorced before his daughter gets older.

Russell and Monica Diaz got married in Las Vegas in August 2010. Unfortunately, the couple relationship couldn’t last longer than two years. After getting a divorce from Monica, he is living taking care of his adorable daughter. 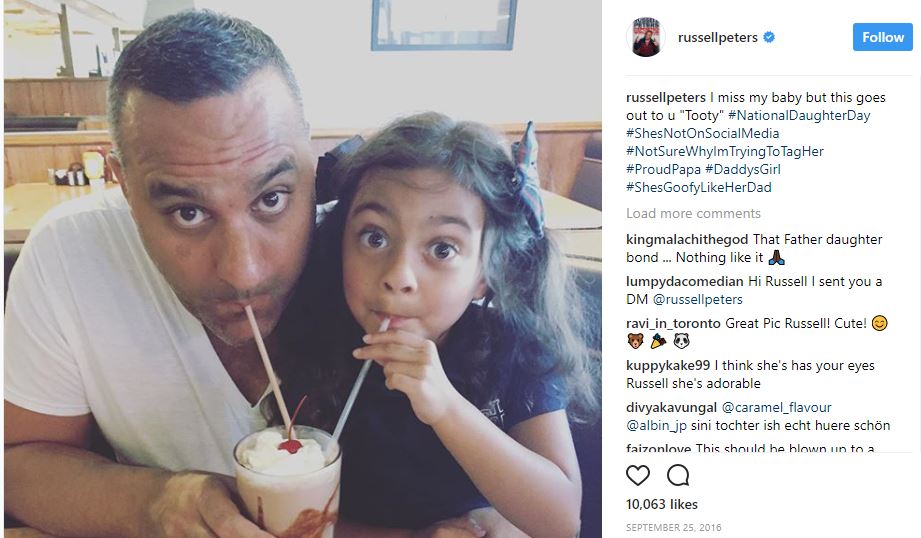 Russell Peters has a cute little daughter Crystianna Marie Peters from his former spouse, Monica Diaz. Crystianna was born on 14th December 2010. While going through Russell’s Instagram account we can find that he is spending much time with his daughter.

Life is a long run and we probably need someone by our side to go further. Maybe Russell realized it and finally got engaged to his girlfriend, Ruzanna Khetchian in 2016. This time Peter has not been shy to give information to the media.

The couple hasn’t married yet. As per other sources, it is found out that, he purpose her with a 4.25-carat diamond

When asked if he purposed Ruzanna by getting down on the knee he replied, “Possibly, that may have happened. I was naked and about to go to the bed and I got down on both knees because one knee hurts.”

Take a look at the lovely picture of the couple showing their wedding ring and you will be sure. When asked when is Russell getting married he said that he is not rushing things this time. He also said laughing, “I still got a bunch of side chicks I got to go through.”

Well, we also hope that the couple does not rush this time and take the decision very genuinely. A big Congratulations to the engaged couple.