Comedian And Writer Katherine Ryan Is Pregnant With Her Second Child-Who Is Her Baby Daddy?

Are the childhood sweethearts married? Has she welcomed any kids before as well? Know everything right below:

The 37 years old comedian is pregnant. Ryan announced the happy news during a live recording of her podcast Telling Everybody Everything in Kentish Town.

For your information, this is the first child of the childhood sweetheart, whereas is the second kid of the comedian.

As per the podcast recording, Ryan revealed that she is due to give birth over the summer. However, she did not reveal the exact date. 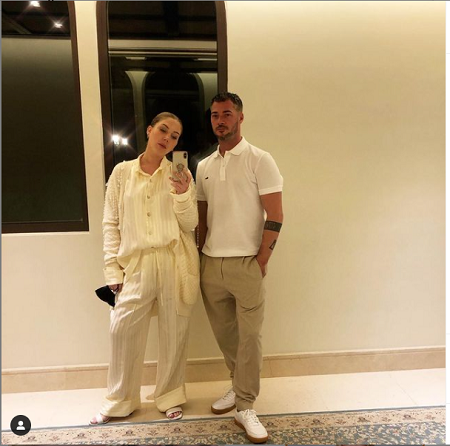 Last week, the 37 years old comedian flaunted her growing baby bump for the very first time while appearing on Celebrity Juice. She wore a stunning silk green gown that clearly revealed her baby bump. However, the comedian did not talk about her pregnancy.

Ryan is already a parent to a daughter Violet who is eleven years old. She had a civil partnership with her partner back in December 2019, in a low-key ceremony in Denmark after they rekindled their romance. They got married in December 2019.

The duo reconnected after twenty years when they agreed to have a one-night stand, but they grew a love for each other.

Speaking up about their childhood romance, Ryan revealed that they were in a relationship when they were fifteen or sixteen years old. The comedian claimed that she even made the letters into a blanket for their one-year anniversary.

Ryan was previously in a relationship with actor and television presenter Jeff Leach. They dated for a very short period of time. After breaking up with Leach, she began dating comedian Alex Edelman.

As of now, Ryan is happily married to Bobby, and the family of three resides in Hertfordshire.

Talking more about her personal life, she has been treated for skin cancer twice.

Ryan has also opened up about the cosmetic surgery she had. Back in her early 20s, she had a breast augmentation. She went through a second augmentation after her relationship ended.

Ryan, who has been actively working in the entertainment industry for a very long period of time as a comedian, writer, presenter, and actress, has a net worth of $4 million. She lives a lavish and comfortable lifestyle.