Brooke Burke & David Charvet’s Mysterious Split: Inside their years of relation and separation.

Brooke Burke is “deeply saddened.” She is ready to be break silence on her mysterious split and be real honest.

Burke filed for divorce against husband David Charvet on Friday. Moreover, the actress is seeking physical custody of her two kids Shaya and Heaven rain.

Saturday vibes | Hope you make it a special one. ???

Also Read: Brooke Burke-Charvet is Living Happily with her Husband David Charvet and Children, Know about her Married Life

On April 9, the former Dancing With the Star revealed the mystery behind ending of her 7 years relationship with hubby Charvet. She took ModernMoms site to detail the reason for her split where she said she was “deeply saddened” but was the necessity of entire family member.

The Playboy cover girl revealed that she loved being married and can’t actually figure out the actual difference between “giving up & letting go” and when it was the time she can’t figure out what to do at the very moment. But recognizing the happiness, she finally decides to get divorced.

Burke added her separation was nothing sensational that led to divorce asking to believe her, the only belief was to discover new ways to remain a loving family.

The TV star said right decisions are always tough to choose and more painful to embrace the change. 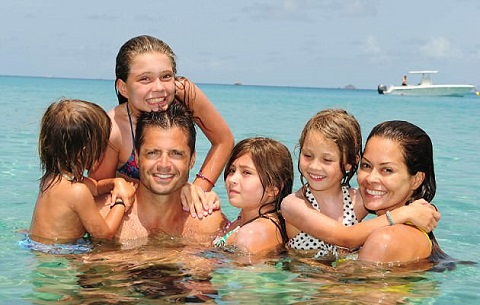 Burke was first married to plastic Surgeon Garth Fisher and has two daughters Sierra and Neriah before wedding Charvet in 2011. Burke began dating Charvet in 2006 after she divorced her first husband in 2005.